How would a carefree unapologetic family feel if they knew that their father had died? Well, this week’s episode of Shameless answers that questioned and then some. With Frank needing to get away from some serious thugs, he does the one thing that can make most, if not all, his problems disappear. But, does ‘killing’off a main character so soon in Shameless lead to the death of an episode? Push the security cameras out of view and read on to find out.

This week starts off right where we were left last week. Frank is desperately trying to avoid the men he owes money and sadly, it seems he will never get away from the men. All hope is lost for Frank until a close ‘person he hasn’t pissed off yet'(Frank doesn’t have friends according to Fiona) informs Frank that the best way to lose the thugs is to stage his own death. After trying to pawn a $35 watch and steal from a blind man, Frank realizes this is his last choice. It was interesting seeing Frank tell his family he was going to ‘kill’himself but, more interesting to see that Lip, Debbie, and Carl all have wanted to see Frank dead at some point. I know that this family is nowhere near the families we see on television and to see that even the children wished death on Frank proves that this family is as the title 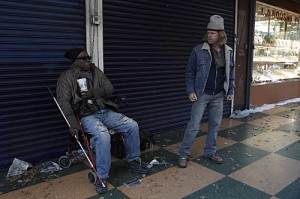 says, shameless. With Frank in a casket, the only the left was to have Frank buried. The quick thinking of the family once again saved the day, with Carl taking lead hoodlum this time. Now, the wake is where the family, and more importantly Frank, shined this week. After saying some kind but most likely untrue things about Frank, the bar erupts as Frank emerges and sings some karaoke. This final scene provided some great moments of the group. With Fiona and Steve becoming closer than ever, Kev and Steve sharing a nice bro-moment, and of course Frank knocking over the big screen television for the umpteenth time. In certain aspects, I wish I had a family who could pull together like this. You know, minus all the extra baggage the Gallagher’s carry.

The other main story this week focused on Kash and Ian… and Mandy’s brother. With Mandy’s brother’s recent strings of theft at Kash’s store, Kash’s wife decides it’s time to take matter into her own hands. She has the security cameras fixed so any shoplifter can now be recorded and prosecuted. This would great if the only funny business at work was theft. Kash and Ian soon realize that now their relationship would need to be sneakier. It was quite interesting to see the two attempt to continue their relationship only to have Kash’s wife find out on an unsteady camera. Ian has had quite a lot of trouble with his life in terms of sexuality for a while but it only got worse as even though he still has Kash, Mandy’s brother also had his way with Ian after a brief fight. The writers are doing a great job with Ian and I can only imagine things are going to get worse with his life now that he has two partners.

This week proved that a death in a television show can actually make an episode shine brighter than an original expectation. I’m glad to see that Frank hasn’t really kicked the bucket as he provides a slew of hilarious moment’s week in and week out. Hopefully next week, Frank can have some good moments without going six feet under. A