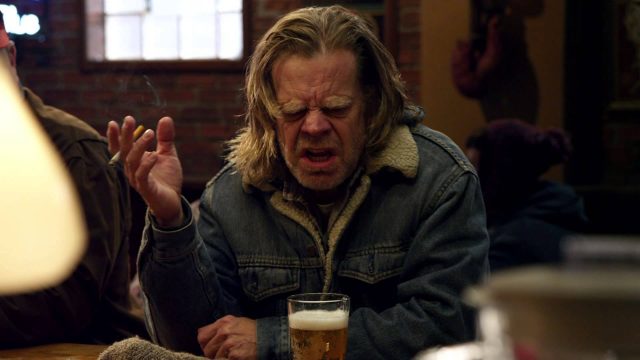 Frank Gallagher is one of the main characters on the hit Showtime series Shameless, and is played by the talented William H. Macy. The show is a moving comedy-drama about the lives of the Gallagher family in an impoverished Chicago neighborhood. This award-winning series is extremely popular not only for its outstanding acting and humor, but also for its honest and unabashed depiction of modern poverty. It is a show that presents the poor not as a sideshow, but as people who live only blocks away that face significant financial, medical, and personal issues.

Frank is essentially responsible for the family’s misfortune. He is very promiscuous, which has led to the birth of his children: Fiona, Lip, Debbie, Liam, and Carl. Ian is another child in the family, although Frank is not his biological father. Frank is an alcoholic and drug abuser who consistently attempts to mooch off his children or anyone with money. A great deal of the family’s issues arise from Frank’s efforts to secure money, drugs, and alcohol.

Although he is perhaps defined by his alcoholism and depravity, Frank is actually a much more complicated character. He has a great deal of charisma, he has the capacity to be kind and compassionate, and he is surprisingly eloquent. However, what is most impressive about the character is his intelligence. Many people would not associate a character driven by the desire to subvert authority in order to attain illicit substances with intelligence; however, Frank has repeatedly shown that he is incredibly smart. Here are some of the facets of Frank Gallagher that best illustrate his intelligence.

One of the reasons that Shameless is so much fun to watch is to hear the long rantings and ravings of Frank Gallagher. While he is known to pontificate, these speeches display his impressive vocabulary and eloquence. Further, they reveal that he is actually educated on a number of topics.

When called into Chuckie’s school to discuss the boy’s anti-Semitic presentation, Frank sets off on a speech centered on the First Amendment right. He points out the hypocrisy of how the school staff is attempting to censor the child in the name of creating an inclusive environment, stating that the right to free speech is a double-edged sword. Further, he shows his awareness of how capitalism conquers all other divisions, arguing that eventually there will be no religious or racial divisions, only the divide between the rich and the poor.

In addition, he became an icon for the gay community when one of his speeches was televised. Ranting at a mayoral candidate, he states that the law which prohibits gay marriage has a significant impact on the lives of gay couples who cannot share health benefits. He argues that it is foolish to allow men and women who betray and abandon each other to enjoy these benefits while keeping them from loving couples of the same sex.

Most recently, he has roused a great deal of support from the homeless community and the people and organizations who seek to help these individuals. All of his speeches are extremely entertaining, but contain remarkable insights into real issues that people face today. As well, they are delivered with Frank’s characteristic eloquence.

Not only is Frank intelligent in his words and phrases, he is extremely knowledgeable about the world he lives in. This allows him to take advantage of the government system and play with the emotions of others to suit his own needs.

One notable example is how he buried the deceased Aunt Ginger in the backyard without telling anyone and secretly collected her social security money for over a decade. Like most of his schemes, this was eventually uncovered which left the family scrambling to find a replacement Aunt Ginger.

However, it is not just the system that he attempts to manipulate for his own benefit. Frank is an expert at toying with people to suit his own needs. He once even called child protective services and gave an anonymous tip which led to a visit at the Gallagher house, which Fiona had kicked Frank out of. He also is well aware of the lengths that the poor must go to in order to receive services like the liver surgery he needed. In order to secure the funds, he had Carl break his leg.

Most recently, Frank chained himself and several of his homeless companions outside their new home in order to raise awareness and sympathy for their cause. His actions are routinely immoral and disgusting, but he clearly has an exceptional ability to work around his conditions in order to achieve his goals.

His Talent for Deception

Frank is also known for his lies and deceit. Although he is rarely trusted by his family and neighbors, he still manages to convince people to help him. It is only through his intelligence that he is able to manipulate people so well.

One of the earliest examples of this is his relationship with Sheila. Suffering from agoraphobia, Sheila is a shut-in who receives a great deal of disability money. Frank seduces her in order to take advantage of these payments, as well as her cooking and the shelter of her home.

As well, he has been known to be a great liar even to his own children. He once convinced young Carl that he may have cancer in order to gain money from a charity.

Lately, he has taken advantage of both the generosity of people who want to help the homeless and the homeless themselves. He convinced them that he is looking out for their best interests, when he has actually pocketed a great deal of the money they have brought in from donations and begging.

Although casual fans may know Frank as no more than the alcoholic troublemaker who is the father to the other main characters in the show, he is actually exceedingly smart. From his astonishing ability with words to his never-ending ability to abuse the system and other people, Frank’s mind is quite brilliant. As well, he uses his gifts with words and his creativity in order to routinely deceive other people into giving him what he desires.

Despite his lack of morals and his quest for alcohol, drugs, and money, Frank is actually one of the smartest characters on television. While he lacks formal education, he is knowledgeable about a wide variety of issues. He uses this knowledge to complement his street smarts in order to concoct an endless stream of plans to achieve his goals. While they almost always fail spectacularly, one thing is certain: there will never be a situation that Frank Gallagher cannot scheme his way out of.