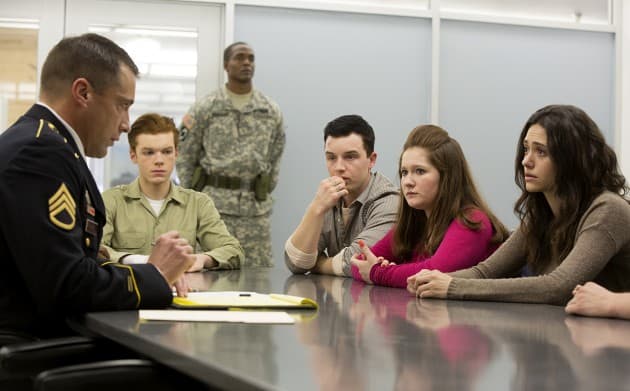 This week’s episode of Shameless took turns I did not see coming; it had me smiling from ear to ear and gasping in fear for the characters. The Shameless cast certainly got up to some shenanigans this week. We were served two big shockers, which will most likely be addressed in the finale.

I want first to talk about Kev and V, because this episode gave me exactly what I wanted from their relationship. I’ve always had faith in their relationship, no matter how unconventional it has become this season. What better way to mend their marriage than fixing the rundown Alibi?

They confess that Svetlana performed her ‘wifely duties’ for each of them, to which Kev wants to know all the details for all the wrong reasons. V rebukes Kev’s interest in her and Svetlana with “We’re not together, so you don’t get the story,” and it was so strange and correct for their relationship. Alibi regular Tommy helps with a shopvack to drain the flooded bar. He negotiates that helping them saves roughly $5,000 should get him top shelf drinks for a week, and V says, “Top shelf here is the cheap stuff, just on a different shelf.”

Kev becomes nostalgic when he says that, “It’s kind of nice that we’re doing this together, even if we’re not together,” and as a result, V admits to going on a date with Eddie Murphy. Kev blows the ‘date’ way out of proportion when he rationalizes that dating is much worse than what he did at Lip’s school.

V is furious! She should be, too. They have a hilariously improvised romantic talk in the ‘rain’ (the exploding water pipe over their heads) about their relationship. V makes an excellent point when she brings up how she feels that Kev did not want to be with her but found it easy, even meaningless, to be with several different girls at the university. I had this moment of realization where I couldn’t believe I didn’t realize that was a serious issue in their relationship. They make up, and I am completely satisfied with their resolution this season. My babies are still together. Hooray!

Then there was Frank and Bianca. Who could believe that after the beginning of this season I could actually come to care about the Frank plotline? Certainly not me! In this episode, we really got to see that Frank was not kidding about loving Bianca, in his own weird way at least. Both Bianca and Frank almost fall to their death while drinking atop her building’s roof. We start to see signs of Bianca’s illness, and it’s very sad to see Frank look concerned, because when have we seen Frank care about anything more than narcotics?

Bianca conquers her fears of stepping on train tracks tenfold when she and Frank sleep together on them, and the train almost crushes them. Frank has a vivid realization of wanting to live and enjoy life instead of risking his life at every moment. Bianca says she misunderstood Frank because “I’m dying and you’re an aging alcoholic with no purpose,” so they amend their relationship to allow Bianca to do whatever she pleases, which doesn’t force Frank to risk his life.

Frank earnestly doesn’t want Bianca to do more hard drugs because he fears she will only die faster. This entire scenario is still fairly selfish because he wants to keep her around because he is in love with her, but his selfishness leads to actually trying to help her. He uses her phone to text the Gallagher address to her family, and they show up in the morning. When Bianca finds out, she is so upset and tells Frank that she is not in love with him. She gets her family to wait for her downstairs as she slips out the back for another country. She originally leaves Frank behind but allows him to tag along. I never thought I would care about Frank in any way, but here I am. I fear we will lose Bianca next week, and I am not sure I am ready for it.

Lip’s plot this week contained a lot of implications, and nothing was really certain about him and his professor. He got a chance to tell off a gentrifier when the man said “Good for you, it’s impressive,” regarding Lip going to college and being from around the area. I was really proud of Lip for maintaining his roots even though he clearly doesn’t fit in South Side anymore. Lip meets his professor’s ‘friend’ Norbert, who I suspect is another one of her lovers. I cannot wait for Lip to find that out. Yet again, I am left unhappy with what little we’ve seen of Lip.

In another disappointing plotline, there’s Fiona! I do not recognize her this season; the writers keep putting her through the same old motions in each episode and it is just so overdone. The only remotely interesting thing she did this episode was confront the Army representative about Ian’s mental health. The scene left everyone a chance to tell how ‘crazy’ Ian has been, and Ian was visibly unhappy about it. It worked, though, and he was released into Monica’s custody!

Monica’s reveal was so wonderful! I loved that Ian has apparently been talking to her all along, but it was shocking to see how normal he seemed when he was talking to her. It was good to actually see her after the family spent so much time referencing her. Monica gives Ian some advice I couldn’t bear to hear: “There’s always gonna be people who are gonna try to fix us,” and “you need to be with people who accept you for who you are.” At the end of the episode, we see Ian and Monica hitchhiking, which only makes me more nervous for Ian. I started this season worried about him, and I still am. I guess the writers can’t give us everything we want in one season, but it doesn’t feel fair to the character.

Finally, the biggest and most downplayed shock of the season: Mickey kills Sammy. It’s an accident, of course, as are most things in the Gallagher household. Mickey drugs her, and she lays on the couch, wide eyed and seemingly dead as a doornail. After Debbie has a reasonable panic attack, they stuff Sammy in the crate just outside the house. I immediately thought she was still alive because Mickey did not check her pulse, but even during the scene in the morning, when the crate is taken away, she isn’t screaming for help. Rest in peace, Sammy. I never could decide how I felt about you.

“Drugs Actually” left me with mixed feelings about the tone of this season, but it has me looking forward to the season finale. I have hopes that Ian will come to his senses and return home to a stable job. I hope that Fiona will drop all relationships with men and focus on her family, and I cannot wait to see how Mickey and Debbie’s murder partnership pans out next week. Look forward to my last Shameless review for the year!