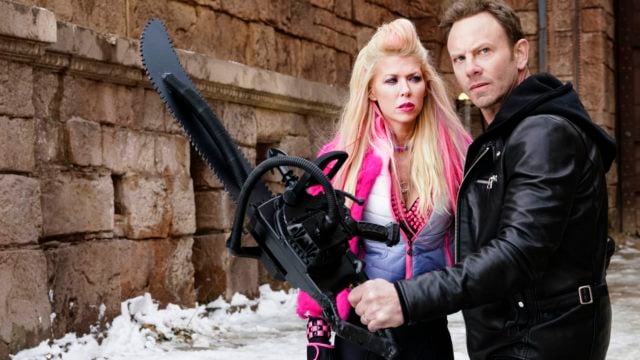 There have been a LOT of cameos throughout the Sharknado movies, in fact it seems like everyone wanted a part in them at one point even though the money couldn’t have possibly been that great. The exposure and the idea of belonging to something that could become the phenomenon that it did however is sometimes just too good to pass up, especially for those folks that might have been hanging onto a career that wasn’t doing much at the moment. As ridiculous as this movie series is, and it is without having to stretch your imagination, it’s definitely become a haven for those that either need something to liven up their career or just want to be a part of something that’s somehow turned out to be kind of special in a way. Whether they’re selected or they audition is hard to figure out but the fact remains that a long laundry list of stars and former celebrities have taken to showing up on Sharknado and to be honest they sometimes seem to outnumber the extras. Okay not really, but there are still a lot of them.

Some of them get to stick around while others are, well, there and gone in a very literal sense.

The ringmaster himself shows up in Sharknado 3 and does something you would never expect anyone in a horror movie to do without suffering the consequences, he stops when all the mayhem is going down and gets close to a shark that’s still alive. Yep, that’s right, the thing is still moving and he decides to get a shot with it, but there’s just on problem. Even in real life sharks don’t just stop moving when they’re out of water. If they’re still alive then they’re going to thrash and move around, and if they see something this close those jaws are going to shut quickly and without mercy over whatever, or whoever, is standing within reach. Thankfully in real life though most people would make sure the shark is dead before posing with it.

A lot of folks had to have been secretly, or openly, hoping that Ann Coulter would get chomped on or at least roughed up a few times. But somehow the woman doesn’t get much more than a scratch on her as she survives the ordeal and even helps impale a shark on the American flag. Do you think the censors might have had something to say about this? But honestly, seeing her play the role of the Vice President of the USA was just about as scary as having to surf down a flight of stairs using one of the pictures from the White House as a boogie board.

It’s been a while since we’ve seen Tommy Lee Davidson in anything big hasn’t it? This guy used to be huge when it came to In Living Color and he even went on to star in several movies that were popular back in the 90’s. But nowadays cameos and special appearances seem to be the norm since he hasn’t really been in much throughout the last decade or so, or so it would seem. He’s a great actor and a funny guy, you would think that he’d be able to find more to do. But his part in this film is that of a jerk really.

Gary Busey has always been awesome even after the injury he incurred that messed him up a bit. Since that time he’s been a bit more erratic and kind of hard to take at times, but when he’s put into roles that call for an eccentric it just works. He’s one of the few that seems like he could benefit from this movie since he’s always seemed just a little edgy, if not over the edge, and he’s just nutty enough to take up a role in this type of film. He’s a lot of fun to watch and always has been considering that he can flip from calm and composed to ready to tear your heart out in a split second.

Talk about an elaborate death scene. The former Malcom in the Middle child star has had a few different roles throughout his adult life before this but his death sequence in this movie was nothing short of gruesome and cringe-worthy as he tries to make his way to the top of an RV in order to trigger an explosive device that has the effect of cancelling out the storm. On the way however he cuts open one hand, then has his other hand ripped off by a shark that goes flying by. Then when he gets to the top of the RV he loses a leg, and then his other arm as he tries to trigger the device. Then, finally, as though defying everything that says to lay down and die, he presses the red button with his chin and KA-BOOM. Now THAT’S a death scene.

There are a lot more cameos in these movies, but jotting them all down would take an eBook to explain and detail their parts it would seem.