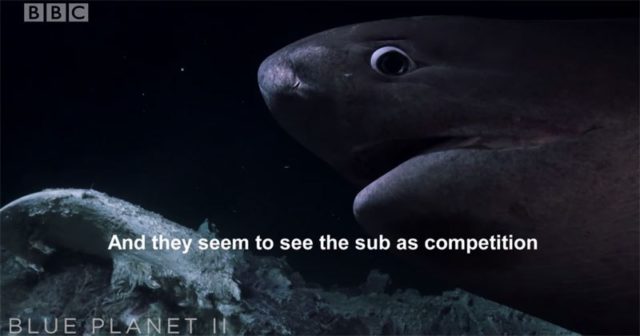 It seems to me that expecting sharks to act any differently than any other animal when you approach their food isn’t bound to produce any different a result than what was seen here. Do you like people pushing up on your meal? Have you ever thanked someone for eyeballing the same thing that you want to eat? The answer is almost always no, so expecting a wild animal to do the same is kind of ridiculous. Plus, this is one of the only times that sharks are seen to get really aggressive, when they’re eating and feel disturbed. In an environment that can be as harsh as the open ocean it’s pretty understandable that they would feel the need to compete for resources even the meal they’re defending is enormous. There’s really no such thing as manners in the animal kingdom, it’s eat or starve.

The group of scientists in this miniature sub were seeking a whale carcass to find out just what happens when it sinks to the ocean floor. You can imagine that they found something more than what they were expecting. To dispel a quick myth, sharks won’t just eat what they can catch. It takes a lot of energy to hunt and can be more trouble than it’s worth at times, so thinking that a shark will live on just what it can catch is kind of silly. They aren’t averse to being scavengers and will go after pretty much anything they can find. If they find competition for that food source they’ll even get a little aggressive so as to let the other sharks know that this the food source they’ve found is theirs.

They’ve got no problem getting a little rough with the sub either, but each hit packs a great deal less force than it would take to cause any structural damage. If the sharks so desired the could probably pack a great deal into a real hit, thereby damaging at least part of the structure. Thankfully their bumps are more of a warning than a real threat. It’s a way to let those in sub know that this is the sharks’ domain and that they’re not welcome. Eventually however the sharks go back to their meal and seem to forget the sub is there.

This would be rather terrifying to be honest. If you’re claustrophobic or afraid of sharks this would be something that you’d be better off never trying if you can’t master those particular fears. Invading a wild animal’s feeding grounds is an intrusive act that most animals won’t be too happy about and some will get violent over. There was no real way to know that when they went looking after the whale carcass that it would already be laid out for hungry scavengers but it might have been est to either understand the situation before going any closer. Of course that’s not how science works is it?

If you want to know something you’ve got to get right up in it, and possibly offend a few creatures along the way.