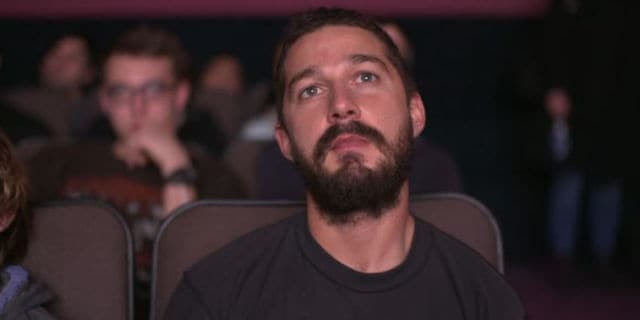 I can’t help but feel that Samantha Clair of MovieWeb is being nice and possibly biased, no judgment, when it comes to stating that a few of Shia LaBeouf’s past performances were ‘strong and nuanced’. In short Shia seems like the guy that had everything going for him and then kind of buckled under the personal pressure that had been mounting for so long apparently. If not for having been a Disney child star and then being seen in the Transformers movies, at least up through the third one, it really seems as though he might have been an afterthought on the Hollywood scene. That he’s gifted is never in dispute since he’s played some great roles in his time on screen, but that he’s troubled and has allowed his personal struggles to show through and affect his status as a reliable star is a big dispute. It’s very easy, and true, to say that show business is a demanding lifestyle and can break down even the strongest of wills, but Shia seems to have gone off the deep end at one point and is now bringing that to the screen so that we can see it in Honey Boy. Some might call him a genius, some might call him a madman, but it seems safer to call him someone that could tip either way depending on his mood that day.

It would seem that he has another upcoming movie that’s going to pit him with Robert De Niro, who is another actor that is great on screen and has people split down the middle as to whether he’s a legend or a liability. The liability portion comes from the fact that both of them have been quite vocal about their disdain for the current POTUS, but as far as it affects their careers it’s not likely that it would unless they continue to push and prod in a way that could be considered damaging in any way to the studios they work with. Barring that, both actors have enough talent and skill between them to create a great movie, now it’s just a matter if Shia is going to be believable in his delivery. Such a thing has never really been a problem in the past, but throughout the last few years Shia has been kind of a running joke throughout Hollywood and has left everyone wondering if he might be on his way out at some point.

The answer to that is most definitely not at this point since he does seem to be making a bit of a comeback as he continues to show up in one movie after another. It’s very easy to admit that during the Transformers movies his act was getting a bit old since throughout all three movies he starred in his main purpose was to exclaim, scream, and make sarcastic comments that were supposed to be funny. While some of them were thanks to good timing and his costars the rest of the time he seemed like a very unlikely individual to be helping a group of intergalactic warriors do much of anything. The only reason he was in the movie really was because of an ancestor that was cooked up that had left behind a pair of glasses that had the coordinates that were important to both sides in a way. By the time Transformers: Extinction came around he was long gone and it was probably better for him that he was.

Bashing Shia at this point is kind of meaningless since almost everything that could be said has been and the fact is that it would almost seem that he’s grown up a bit at this point and is ready to come back and take on his career once more. What this might mean in terms of what he’s going to present to the audience is still in question, but we’ve all seen that he can and does produce quality acting when he really puts himself into it. We should be able to agree that Indiana Jones and the Kingdom of the Crystal Skull was kind of a bad idea on his part and should just be left quietly on its own in the corner. Pushing past that though it’s been seen that Shia has taken on good roles throughout his career and has turned in a lot of performances that are nothing less than great. So maybe it’s true that he’s over whatever snafu in his life that was causing him so much drama, but hopefully this means that he’s ready to get back in front of the camera and do great things once again, greater in fact than before since he’s older, hopefully wiser, and has a greater frame of reference to work from thanks to his added life experience.