Home
Movies
Should Spaceballs Get a Sequel? 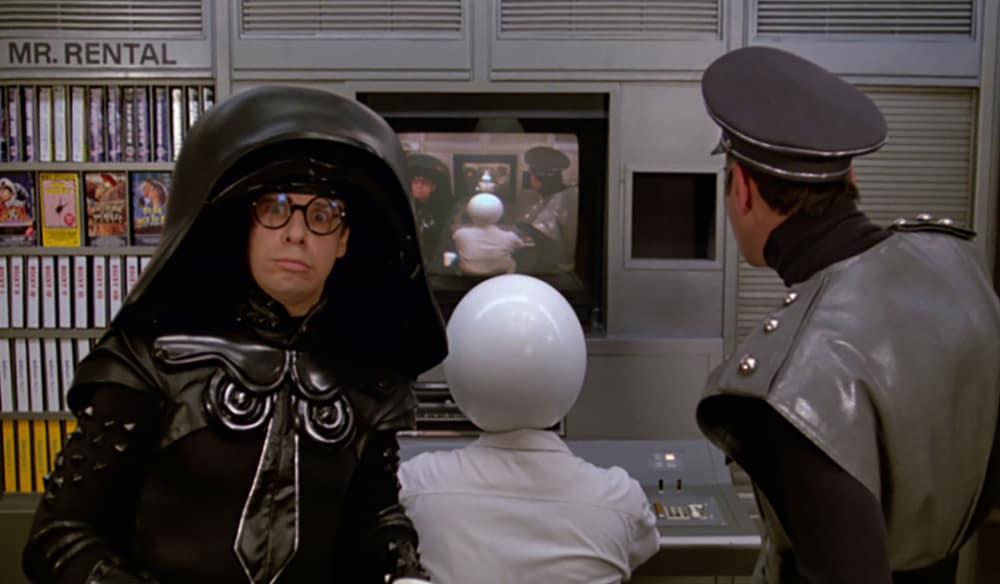 It’s an honest question really, and one that a lot of people would love to be able hear ‘yes’ to now that Rick Moranis has come back to take part in the next chapter of the Honey I Shrunk the Kids story, Shrunk. Whether or not a Spaceballs sequel could ever get off the ground however is kind of hard to say since when you look at the Mel Brooks classic from the 80s it’s hard to think that the same type of humor that made us laugh back then would be viewed as acceptable in the current day and age. It’s nice to think that someone would be likely to have the nerve to stand up to any and all over-sensitive types and do this their own way, but it’s also evident that Brooks’ sense of humor isn’t fully appreciated by everyone, particularly those that happen to believe in the PC era and all it stands for. With that being said though the movie would be something quite different in a way since at least a few of those that starred in the original have passed on, such as John Candy, Joan Rivers, Dick Van Patten, Dom DeLuise, and Ronny Graham. Plus, a sequel might have to be advanced decade into the future much like Star Wars since all those remaining have become quite old at this point. Mel Brooks is in his 90s for crying out loud, so it would definitely need to be executed just perfectly in order to do any justice to the original.

Spaceballs wasn’t exactly a blockbuster in the theaters, but once it reached the homes of many individuals it gained a cult following that is still fairly strong today since all one needs to do is mention the movie and a number of people will smile in remembrance. It makes perfect sense really since this movie was funny pretty much the whole way through with only a few spots that could be considered kind of dull or awkward. And as Michael Maher of Premium Beat wrote several years back it was one of those that benefited greatly from the 4th wall break method that several other movies have made good use of in the past. The majority of these moments are perpetrated by one of the movie’s most prominent actors, Rick Moranis, and they’re absolutely hilarious thanks to his spot-on delivery and his ability to remain in character the entire time. Dark Helmet was a goofy villain to be sure, but he was meant to be is the point. In fact the entire movie was meant to be one big spoof as it took liberally from Star Wars and Star Trek alike, albeit with much more hilarious results. They even borrowed a bit from Alien and managed to get John Hurt, the actor from the original Alien movie, to perform the same role he’d been given in the scifi horror movie. Remember the line “Oh no, not again!”?

To say that Spaceballs deserves a long-awaited sequel, which was foreshadowed in the original movie by none other than Brooks himself as he was playing Yogurt, a hilarious, gold-skinned spoof of Yoda, but to think that it could happen is still a big if since when all is said and done the movie would still require a lot of care given that a couple of the biggest stars passed away some time ago. It’s possible that the movie could get by without Patten and Graham, as they’re pretty much bound to the characters they played and were fairly dispensable in that manner, but the loss of Candy and Rivers is kind of hard to get around since the characters of Barf and Dot Matrix are a part of the core group that were important to the story. There’s got to be a way to make it work obviously but it would likely take a writer that knows the story, has a good idea of where it can go, and can possibly explain or write in another character for those that have been lost throughout the years. At this point it’s a desire of the fans, not so much an idea that might hold any merit, but there are plenty of people that would love to see this happen. Personally I think it might be worth a shot but only if everything lined up in a way that made it impossible to say no. Padraig Cotter of Screenrant has more to say on this matter.

Rick Moranis is definitely up for it as he’s already said in the past, but whether or not Mel Brooks, Bill Pullman, or Daphne Zuniga would have any interest is hard to say. For all intents and purposes the working environment on the first movie was great for many cast members, but 23 years later it’s difficult to say if any of them would want to come back for anything less than a monumental moment that they’d be crazy to miss.