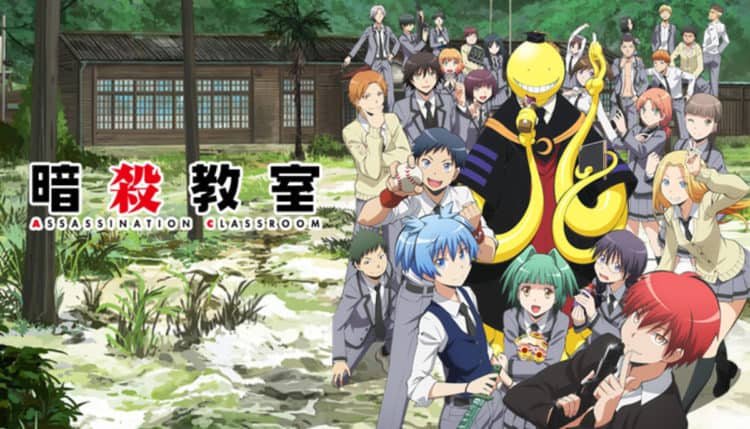 A while back, I was looking for some new manga to read when I happened upon a science fiction, action manga called “Assassination Classroom” written by Yūsei Matsui The story follows a group of young, misfit junior high students that are essentially contracted by the government in order to help aid in the assassination of a global threat who destroyed the moon; that global threat just happens to be their new teacher. Before you keep reading, I will warn you that there are going to be some pretty massive spoilers for Assassination Classroom ahead, so if you don’t want the series spoiled for you, then I would suggest that you prepare yourself. With that being said, should you read Assassination Classroom?

As I mentioned earlier, Assassination Classroom centers around a group of junior high students that are unfortunately casted out of their main school, due to their grades not being high enough to justify keeping them within the same walls as the other students. This misfit class is known as “Class 3-E” and they are the laughing stock of the rest of the campus. Since no one else really wants to associate with the students in Class 3-E, the government thought that it would be a great place to teach students how to assassinate the biggest global threat that the world has ever seen, who just so happens to be their new classroom teacher. This supervillain, dubbed “Koro Sensei” by the class, was supposedly responsible for destroying the moon and causing it to become a permanent crescent. However, this was eventually revealed to not be the case, and that it was actually a scientist named Yanagisawa who was responsible for the destruction of the moon, due to his torturous experiments that went terribly wrong. Class 3-E went on to become known as the “Assassination Classroom,” because their entire goal was to assassinate their teacher. There’s a ton of twists and turns, and even some life lessons that can be learned through the series. Being a science fiction story, there’s a ton of options available for storylines – I mean, they even hijacked a spaceship launch mission and sent a couple of students into space to retrieve some valuable data that could save Koro Sensei in one arc. This series is definitely nothing short of some pretty out of this world, wacky, and downright physically impossible stories, which means that it never really gets boring and keeps you on your toes every step of the way. In the final chapters of the manga (before the epilogue), the students are finally able to come together to accomplish their goal of assassinating Koro Sensei, which was expected the whole time, but after giving us a glimmer of hope that there was another way to save the planet by preventing Koro Sensei from exploding, I was hoping that the series would end with Koro Sensei surviving through it all. However, while Koro Sensei didn’t end up surviving in the end, it was definitely a solid ending, and the ending that the series should have had. It is also worth mentioning that Matsui did say at the end of the series that it is a possibility that we could see Class 3-E as well as Koro Sensei return at some point in the future, however, Assassination Classroom itself is completely finished.

I loved the art style through the entirety of Assassination Classroom. I thought that Koro Sensei had a very wide variety of expressions and character styles just by himself that it was incredibly unique and fun. Unlike Shonen manga, there aren’t that many moments in the plot that really call for seriously drastic art style changes, or incredibly complex and intense scenes, but that isn’t to say that they don’t occur in the series. Some of my favorite panels from Assassination Classroom come from the tail end of the series, and typically involve Koro Sensei turning black out of anger, or when he completely blanks out and becomes the least intimidating thing of all time.

Should you Read Assassination Classroom?

So, should you read Assassination Classroom? My answer to that question is definitely going to be a resounding yes. I loved every single chapter of this series, and I’m absolutely heartbroken that it’s over, because I want nothing more than to continue reading about these characters and their adventures, but I am also torn, because the ending was so good, that it really does feel like the story ended where it needed to; however, I would definitely not say no to a sequel series that follows the students and their lives today. If you haven’t already, I would absolutely give Assassination Classroom a read.