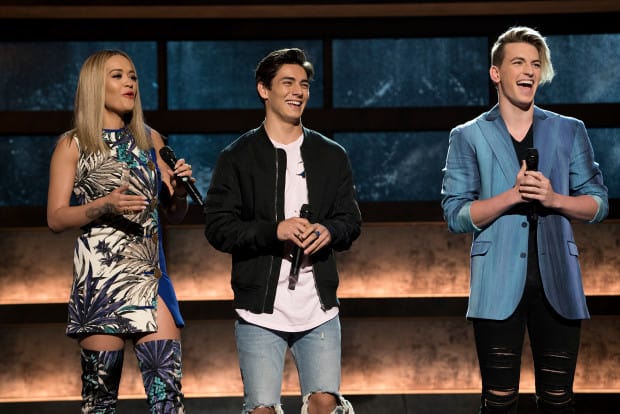 It all started with 30 Boy Band hopefuls from around the country. Every guy had his turn on the stage; evaluated by outspoken Nick Carter of Backstreet Boys, Emma Bunton, the irrepressible “Baby Spice”, and Timbaland, 4-time Grammy-winning producer who always says it like he sees it. These three, would take on the roles of “The Architects”; considering each competitor with a long-term goal of creating an all-new Boy Band.

It had taken ten weeks to find, audition, and select the original 30 competitors. The Architects evaluated their skills. Nick Carter ramped up the heat when he took over the dance auditions. With rapid fire precision, he demonstrated initial dance counts, challenging six guys to carry them off. Timbaland had them all laughing with his own version of “shoulder swag”. But, the humor was short-lived, as 12 singers were cut from the competition leaving 18 candidates to move forward. Timbaland summed it all up when he announced, “Let the journey begin.”

Three talented boys were cut first. The Architects noted that the most individualistic talents may not be the best suited for a boy band. Emma Bunton advised them to retain their individual characters to sing well alone. But, she gave the group one of the show’s first messages about roles:

“There’s a big difference between singing solo and performing in a group.”

Groups had blended vocal sounds that were so good together that The Architects were “blown away”. In following weeks, The Architects surveyed the competitors as they began various training rounds. The 18 moving forward were divided into groups of 6, and launched into heavy coaching sessions with industry greats. Tim Davis, Vocal Producer did voice lessons and sectionals. Adam Blackstone, Music Director, taught the groups musical ethics. Napoleon and Tabitha, along with Sagiv, taught movement and choreography. Make-up artists, hair dressers, wardrobe coordinators and more, took on the gradual process of forming each boy into a marketable package.

Each coach had a role to play in shaping the Boy Band candidates. As it has panned out, understanding personal and corporate roles in the world of Boy Bands has been a prominent and on-going theme throughout the competition.

Tim Davis, was precise describing each voice’s merits and lacks. He never hesitated to remove imperfections with surgical precision. His role? Create finely tuned vocal ensembles while improving each voice. He put forth the show’s next message about roles:

“It’s not about you. You’re here to serve the group and the song.”

Adam Blackstone introduced the groups to rehearsals with a live back-up band. He taught them to experiment during rehearsals, but not in performance. He taught them to listen, to work as a unit, and to maintain a professional musical demeanor. His professional ethics set the bar high for the emerging talents. He seriously commented, “Don’t let your brothers down by showing the audience that you made a mistake.” He provided the show’s next lesson:

“Every performer has a role in the band. Each guy must know his role.”

Napoleon, Tabitha, and Sagiv developed movements and choreography for each song. They also taught the boys to share stories and bond. They spoke about connecting words with meaningful motions. Napoleon provided the show’s next lesson:

“When you bond, you sing better together. You connect with the words, they mean something, and we feel it.”

The next episodes included further cuts, as The Architects encouraged those cut to “not give up” and follow other musical paths for their lives. The next lessons about roles:

And this from Blackstone about musical work ethics:

“There’s nothing that can stop you if you work together.”

“Chemistry is key. Know your role. Sing as brothers.”

What are viewers to understand about Boy Bands as the final episode approaches? The Architects have finished their work, and the last eight will be judged by votes from across America. The five voted into the new Boy Band will be voted in by viewers. Why would The Architects give up control of their finely shaped talents? Will voting increase viewership? Is trading control for viewership the best route to creating the band? Such drama! One thing is certain, the show has taught us that Boy Bands are finely honed machines, that there are roles and order demanded within the realm of the talented, and that teamwork often trumps artistic individuality, and these things may surprise many.