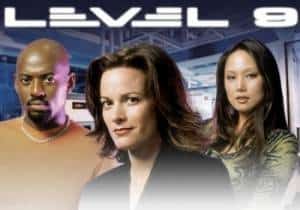 Last night, one of my friends mentioned to me that Romany Malco is on Twitter. That led to the following conversation:

Friend: (blank look) What the hell is Level 9?

Me: That show on UPN with him and Max Martini. The one about the computers…oh, forget it.

Oh, Level 9. That forgotten little series from 2000-2001, which focused on a secret team devoted to the pursuit of cyber crime and had such fun episode titles as “Eat Flaming Death.” I’m pretty sure that I’m one of only a handful of people that watched it before it slipped into TV oblivion, along with the network that it was on. When the Sci-Fi Channel started airing reruns in 2007, I watched it again; maybe it’s the six years’ difference, but while I still love the show, I found myself saying, “I can’t believe I watched this!”

What a difference hindsight makes. For various reasons, I can think of a few shows that I absolutely loved when they aired, but in retrospect my opinions of them are totally different. I still think Mystery Science Theater 3000 is an amazing show, yet as a kid I didn’t notice how cheesy some of the effects and sets were. My friends and I can still recall Supermarket Sweep, but when we saw it on VH1’s I Love The 90’s, we couldn’t stop laughing at how much time we wasted watching people try to carry giant inflatable beer bottles to the checkout. Even the cult shows I grew up with (Star Trek: The Next Generation and Babylon 5) seemed to have lost a little luster between the time I watched them and the time I saw them again on DVD.

Conversely, there are shows I dismissed when they aired that I wish I had given more credit to, because I’ve seen them through DVD or YouTube and wondered what I was doing when they were on. I remember seeing commercials for Sports Night and not watching it. I know I saw the Third Watch crossover episode with Medical Investigation, and yet it took DVD for me to bother with Third Watch. I can only kick myself for lapses in judgment.

That made me curious: what shows did you love in the past that you find yourself second-guessing now? Are you finding ones that you can’t believe you ever watched? Or are there ones you made fun of, only to find and eat your words? Leave a comment and let’s take a walk down memory lane.

Now if you’ll excuse me, I think there’s a Level 9 marathon coming up…