The new season of Dexter has been airing for a few weeks and now Showtime has announced the second season premiere of the Dexter “Early Cuts” web series. The series is available to viewers in the United States on the Showtime website here.

The first episode is now available to watch and Showtime has released a summary of the storyline. 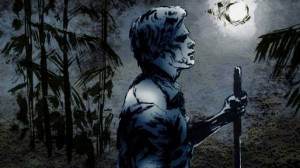 The six chapters in the second installment of DEXTER Early Cuts, feature an even more compelling story, illustrations and animation style — with the first three webisodes illustrated by Sienkiewicz and chapters four through six illustrated by Mack. Dexter Early Cuts: Dark Echo is comprised of one long-form story with a script by Dexter Co-Executive Producer Tim Schlattmann. In DARK ECHO, Dexter Morgan is challenged by a copy-cat killer who does not follow any sort of code. The story opens immediately after his father Harry’s death, with Dexter in his early twenties and his sister Debra still in high school. Dexter is enrolled in medical school where he’s studying anatomy to improve his “craft.” During a routine kill, Dexter realizes that another student has been spying on him and knows that he is a serial killer. He confronts the student after he begins to commit murders in Dexter’s style and the two clash over the ethics of their situations. Dexter’s faceoff with his ‘Dark Echo’ represents the first time his code is tested since his father’s death, and the incident helps reinforce the importance of Harry Morgan’s code.

EmmyÂ® Award nominee and Eisner Award-winning illustrator Bill Sienkiewicz has worked on some of the most famous comic franchises in history including “Batman,” “Superman” and “X-Men,” among others. In the mid-1980s, he was known for revamping comics with his impressionist-influenced style. More recently, he was hired by Warner Brothers to sketch and concept the makeup and wardrobe for Heath Ledger’s portrayal of the Joker in “The Dark Knight,” as well as the upcoming “Green Lantern” starring Ryan Reynolds.

David Mack is a New York Times best-selling author and artist of the “Kabuki” graphic novels from Marvel Comics, the writer and artist of “Daredevil” from Marvel Comics, and the author and artist of the children’s book “The Shy Creatures.” A seven-time Eisner Award nominee, Mack has illustrated and designed jazz and rock albums for both American and Japanese labels, paintings for Paul McCartney and Tori Amos, and contributed the artwork for Dr. Arun Ghandi’s essay on the “Culture of Non-Violence.” Currently, Mack is working with the Philip K. Dick Estate to adapt the science fiction master’s work to graphic novels at Marvel Comics, co-writing a new “Daredevil” story with Brian Michael Bendis, and writing his new children’s books.