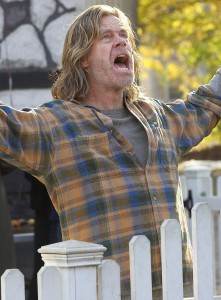 In a not so surprising move, Showtime has bestowed us with more shenanigans from the Gallagher clan and more Episodes of the comedy behind the ‘Lyman’s Boys’ as the cable network has renewed the two hit comedies for second seasons. Here’s the press release from the network.

LOS ANGELES, CA (February 28, 2011) — Hot off their highly successful freshman seasons, SHOWTIME has ordered second seasons of SHAMELESS and EPISODES, it was announced today by David Nevins, President of Entertainment, Showtime Networks Inc. Starring William H. Macy and Emmy Rossum, the outrageous hour-long family drama SHAMELESS received a 12-episode order for its second season, while half-hour comedy series EPISODES, starring TV icon Matt LeBlanc as a fictional version of himself, received a second season order with the number of episodes to be determined. Both series premiered on January 9 to widespread critical and audience acclaim, with SHAMELESS becoming SHOWTIME’s best performing freshman drama ever. Production on both series will begin later this year.

‘The viewer loyalty and critical acclaim that has met both SHAMELESS and EPISODES since their January debuts makes it clear that these two brash and sophisticated series are burgeoning hits,’said Nevins. ‘John Wells is carving out a tone that is truly unique in the television landscape–equal parts drama and comedy. And EPISODES marks the universally embraced and hilarious return to television of an inspired comedy triumvirate: Matt LeBlanc, and creators Jeffrey Klarik and David Crane. We are thrilled with the response to both series and eager to start planning for their second seasons.’

From John Wells (ER, The West Wing, Southland) and Paul Abbott (State of Play, Touching Evil) , SHAMELESS is based on the long-running hit UK series and stars EmmyÂ® winner and OscarÂ® nominee William H. Macy (Fargo, Door to Door) and Golden GlobeÂ® nominee Emmy Rossum (The Phantom of the Opera, Mystic River). Macy plays a working class patriarch of an unconventional Chicago brood of six kids headed by the eldest sibling (Rossum) who keep the home afloat while their dad is out drinking and carousing. The series averages nearly four million weekly viewers across multiple platforms and is on pace to be the network’s second-highest rated drama series behind DEXTER (5.2 million). SHAMELESS is from Bonanza Productions Inc. in association with John Wells Productions and Warner Bros. Television. Wells and Abbott are executive producers; Andrew Stearn (The West Wing, Southland) also serves as executive producer.

‘We’re delighted that our wonderful partners at SHOWTIME are giving us the opportunity to make additional episodes of SHAMELESS,’said executive producer John Wells. ‘We’re having an unbelievably good time making the show and look forward to bringing more of the humor, pathos, and wild sexuality of the dysfunctional Gallagher family to a shocked American audience.’

EPISODES is a co-production between Showtime Networks in the U.S. and the BBC in the UK, written and executive produced by two of America’s most successful comedy writers David Crane (Friends, The Class) and Jeffrey Klarik (Mad About You, The Class). Jimmy Mulville executive produces through his successful Hat Trick production company (Whose Line Is It Anyway?, Worst Week). This comedy series centers around a husband and wife producing team who are forced to navigate the many pitfalls of the Hollywood television business when their successful British show is brought to America, and the U.S. network insists on making the show more audience friendly by replacing their venerable thespian lead with…Matt LeBlanc. Season one of EPISODES averaged nearly two million weekly viewers across multiple platforms (including On Demand and replays).

“To have the opportunity to make another series of this show with David Crane and Jeffrey Klarik and then to make that show for both SHOWTIME and the BBC, whose combined portfolios of comedy are second to none, is both a thrill and a great privilege,’said executive producer Jimmy Mulville. ‘At the end of the first series the writers have placed our three protagonists in the middle of comedy hell. Like the rest of the audience I can’t wait to see what is going to happen to them!”