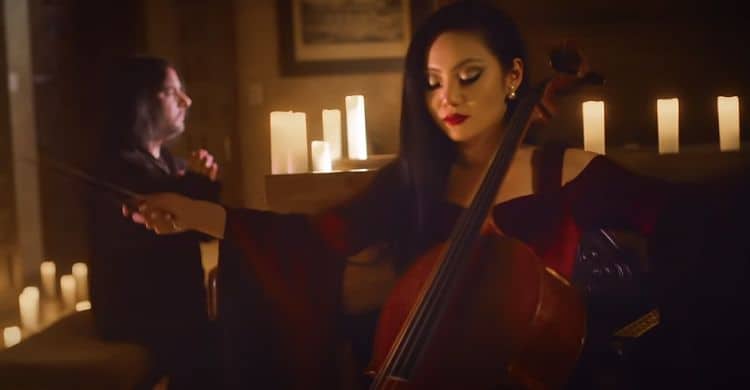 You might feel the need to look up Scarborough Fair when looking at this article and you’ll likely find that it was an actual fair at one point but that it’s also a musical piece that Tina Guo and Leo Z decided to take on in this haunting rendition that is actually quite impressive. It’s times such as this that it’s pretty easy to wish that one was able to play an instrument with such passion and such obvious enjoyment as this since it looks as though these two are really getting into it and having a good time with the piece. As many people know, music can have a multitude of effects upon a person’s mood and can affect people in many different ways since everything from the simple idea of taking up an instrument to the more complex idea of how to play and then master it, music is something that a lot of people feel, even if they don’t end up learning an instrument. The way music can lighten or brighten one’s mood is amazing, and the feelings it can give to a person through one method or another is amazing. some people have a definite preference when it comes to music since like it or not, some folks do prefer the more synthetic sounds that are derived from tracks and pieces of music that they’ve heard in the past, while many people enjoy the idea of hearing something that requires a great deal of skill and time to create.

Tina Guo has been building her career for a while obviously, as has Leo Z, and the two have found a way to get people to pay attention to what they do and to share in their enjoyment in one way or another as they’ve continued to give people the type of music that moves and influences many that listen. That’s one goal of music, after all, to spread the influence and allow people to experience what it feels like and what it can do for their lives and their overall mindset. Music has so many different explanations to it that trying to pin them all down in one article is nearly impossible since it would either take a very detailed, and long, piece of work that would satisfy the feeling of each individual possible, or it would take a very carefully-worded article that would likely lose some people around the first paragraph since just like a foreign language, music is easy to pick up if one listens, but listening hasn’t always been the strong suit of some folks in this world.

It’s possible to feel the music, but this has just as many implications and explanations attached to it as any other facet of music, meaning it would take a long time to explain. The best I can do at the moment to explain this is that music will make an individual feel something, an emotion, a sense, something that will alter their manner of thinking in a subtle or very obvious manner. For those performing the piece it’s a little harder to not be a part of it since when caught in the moment, many musicians will find that they’re so caught up in the act of playing that the music might be all they can feel, at which point one can state that they’re entirely immersed within the overall feeling that offers to take control and keep them until the music ends. It’s a heady experience that many artistic crafts can be said to have, since much like music, writing can grip hold and not let go until the writer has said and done their piece, ending the symphony of words as the moment comes and fades with the emergence of a passage, a page, or an entire chapter that continues to further story that is being told. Music is very much like this, as each piece can grip the musician in a very pleasing way that allows them to both create the music and enjoy the ride as it carries them from start to finish. For those that aren’t into losing control in such a manner, this might sound odd, perhaps even a bit creepy, but it’s a strange and very comforting experience to those that have been through it.

Learning each instrument is not a thing of ease for every person obviously, as a cellist needs to spend a great deal of time and has to put in the effort when it comes to actually enjoying what they do. Imagine spending at least an hour per day to play well enough to cover one song or another. Those such as Tina however tend to spend hours per day in order to perfect their craft, much as any other expert will take a great chunk of their day to ensure that they’re as good as they wish to be.