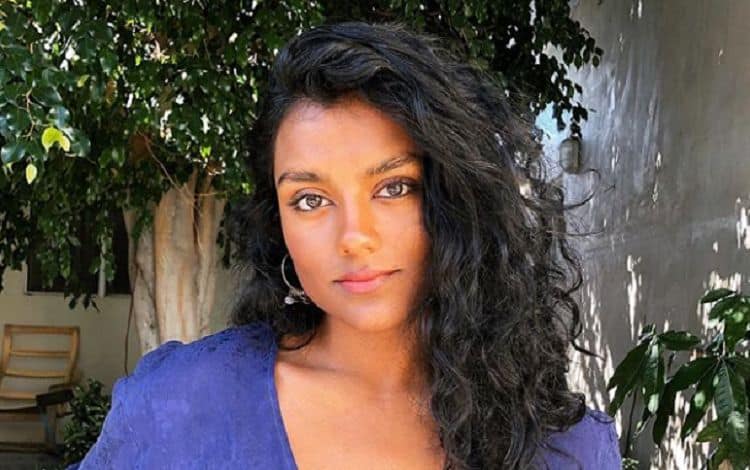 If there’s one thing we don’t have enough of in the United States, it’s appropriate sex education. But, what we do have is a Netflix series by the same name, so it counts, right? Simone Ashley is one of the stars of the show, and she’s also a stellar actress. She plays the role of a teenage girl who is looking to explore herself as she’s growing a bit older, and she’s sometimes awkward in her self-discovery (aren’t all teens?). She’s breaking the mold being that she’s a South-Asian actress playing a mean girl, a popular girl, and a girl who is considered hot and feared by everyone in a world where that role is usually reserved for a beautiful blonde actress – and only her sidekicks are slightly ethnically different. She’s rocking her role, and we want to get to know more about her.

Some people are creative and some people are academics, and it’s rare to find someone who is both. Don’t worry, though, she’s someone who is not both – much like the rest of us. She’s always been a person attracted to all things creative. From acting to singing to spending her time creating things rather than being academically inclined, and she’s not ashamed of that in the least. Creative minds are vastly different, and many people who don’t share that creative mindset aren’t aware just how different and how easily bored and unfulfilled a creative person can become without creativity in their lives.

2. Her Family Worries for Her

She comes from a traditional Indian family who worries for her stability and her future being that she didn’t follow the traditional path. Her family is very much into academia, which is wonderful. However, she’s not. She has never felt inclined to become a doctor or an attorney or an accountant, and that sometimes worries her family to no end.

3. Her Father is Also Creative

Remember when we said some people are creative, some people are academic, and few people are a little of both? Her father seems to fall into the few who are both. She states that he’s always been very into music, but he’s also an academic. This explains where she found her love of creation and the arts.

No one is going to tell her how to live her life, even when she’s been raised by a tight-knit group of people who want to guide her into specific things. She’s a young woman who is firmly within the belief tha you have to make your own life decisions, and you cannot continue to live your life doing what other people want you to do or expect of you. You have to carve out your own path, make your own choices, and sometimes make your own mistakes so that you can learn how to avoid the same mistakes in the future.

5. Her Parents Stifled Her

She is very close to her family, but she does admit that her parent’s exceptionally overprotective behavior caused her to feel as if she was being stifled often in her youth. Of course, there is nothing to be said other than the fact that parents love their kids so much, and it’s understandable that they’d want to protect her and guide her in their own ways, and it was done out of love – something all people who go on to become parents themselves will eventually understand.

Unlike some people her own age, she’s always been a bit of a rebel. She’s never been entirely convinced she wants to do things the normal way. The traditional way. She’s always wanted to do her own thing whether she has the support to do that or not. She’s not someone who shies away from doing what’s best for herself, but sometimes that means breaking the mold and taking a chance that other people might not agree with.

7. She Got to Create Her Character

One of the best parts of her role on Sex Education as Olivia is that she wasn’t given much of a description for her character. This is not usually the case when you take on a role like this, but it allowed her to get creative and to create this character on her own. She was able to make her up, do what she felt the character needed, and she was able to make this character into the person she wanted her to be. That kind of creative direction is amazing.

8. She Likes A Good Selfie

If you take a moment to scroll through her Instagram feed, you’ll find that a good selfie seems effortless. Not only is she beautiful with all her makeup on and her hair done, she’s also strikingly gorgeous without any of that. She has the kind of natural beauty that shines through no matter what she is doing, and she is clearly not afraid to let her natural beauty shine through as much as she can when she has the chance.

She plays one of the cool girls, the girls that everyone wants to be and the ones that aren’t always nice to everyone else, but she also wants the young women who watch the show to feel as if they can relate to her character. She wants them to see that she’s someone who does make mistakes, and that even the cool girl is not perfect. She loves that about the way they’ve allowed her to cultivate this character, and it’s worked out wonderfully for her.

She might have sometimes felt her father was too overprotective, but she also loves him and learned to appreciate good rock and roll from his love of music. She’s a fan of all the classics, and she loves to listen to them still to this day. The Rolling Stones, yes. The Doors, of course. She’s got great taste in music, which is refreshing.