When MTV announced they were adapting E4’s Skins, the controversial UK teen drama that displays gratuitous sex; violence; and heavy drug use on a regular basis, I was in the forefront of an angry fanbase screaming “Why?!” in unison. How could they possibly transfer Skins over to the U.S., where teen soaps rule the roast, without botching what made it a gem in the first place? It was deemed impossible and not worthy of a lot of fans attention.

Then news of the original co-creator Bryan Eisley’s involvement helped turn my judgement around. Later, my interest was really peaked when I found out the original behind the scenes format of the U.K. version (young writers, unknown cast, etc.) would still be in play with the American version. In short, I came to my senses pretty quickly to the idea of an American version of Skins, musing that this adaptation could actually work.

Now that I have seen what Skins USA has to offer, all I can say is that the Parent Television Council will have a field day with the subject matter on the show.

MTV’s version of Skins has maintained the wonder and life that its British counterpart put into play when it premiered back in 2007. The antics that the kids get into put current teen dramas like Gossip Girl and 90210 to complete and utter shame, just like its 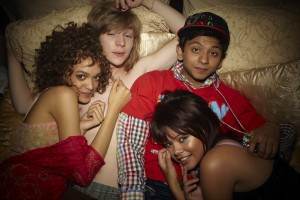 original namesake still does to this day. As I’ve said before, Skins (both incarnations) is the closest thing the next generation will get to a new John Hughes movie because of its smart and accurate depiction of teenagers, something not really since the late 80s. The stories are real, complex, and ballsy to the point that parents will probably want to rethink what their kids are doing at the current school dance down the street. Or if their kids are really even at the school dance at all.

What made Skins stand out in the U.K. has been preserved for American audiences. Some American teens and/or young adults will scream that some of the plots and events that unfold within the series are shock value fodder. However, you must peel the shock away to see Skins for what it is: a window into the eyes of the modern teenager; resembling a pearl enclosed in a dark, messy clam waiting to be discovered. The American cast is just as rambunctious as the U.K. crew, but they are also some of the most deep teenage characters to grace the small screen in a long time, not counting Degrassi, which is set in Canada. While I am a huge fan of Gossip Girl, 90210, The O.C., and other teen shows before those, I consider those shows ‘fantasy’ compared to the brutal honesty that is Skins.

In the American version set in Baltimore, Maryland, the kids are the American counterparts of the First Generation Skins cast with slight changes here and there. There is still Tony, Michelle, and Chris, who all maintained their first names while having their last names changed. Sid is now Stanley, Cassie is now Cadie, Jal is now Daisy, and so on. The most notable change is in the character of Tea, who is the American version of Maxxie. The attitudes of each character are all the same, but that doesn’t mean that they are a complete carbon copy of the original cast. The first episode is a direct remake of the U.K’s first outing as it retains almost everything from the drug dealer storyline to the drowning of the SUV at the end of the episode. There are slight differences throughout, which fans will quickly point out when they see the episode. Cadie isn’t as bipolar as Cassie was, but she’s still a pill popping fanatic and equally spaced at times. Tony is less cocky, but still smart. Nicholas Hoult’s Tony was very creepy with his somewhat soulless demeanor in Skins U.K.’s first season, but James Newman brings a somewhat new take to the Tony character. While Hoult’s Tony is the equivalent to shark, Newman’s Tony is like a panther or cobra, cool and calm until the moment presents itself to strike. It’s not that big of a difference, but at least there is a difference.

One character to look out for is the lesbian cheerleader Tea, who is portrayed by Sofia Black D’Elia. The most original character out of the entire cast, Tea’s inclusion helps create the diverging line from the U.K. series in terms of unique material for the show. If I say anymore, I could possibly ruin how much she rocks on the show.

After the premiere episode, the show takes off their training wheels and sets off on their own adventures. It’s great that while they aren’t trying to make a direct remake of the flagship series, the ingredients that have made Skins one of the must see shows of the U.K. are still intact and fresh than ever. The question now is if fans will feel the same way that I do. I can only say that I really hope that they can put aside their anger, because this is the closest thing average American teens will ever get to being represented on American television. That being said, there might be some opposition to that very depiction, because I never really experienced the wild parties the kids tend to end up at. Initially, I thought the UK kids were just more outrageous than American kids, but I’ve been told that is not the case. Seems that I missed that train growing up I suppose…

So rest well Skins fans, because the show is in great hands over at MTV. Besides, the network airs Jersey Shore and The Hard Times of RJ Berger so if those raunch fests can stay on the air, then Skins should have no problem maintaining their image of top class debauchery which they can only do.

Expect a lot of coverage for this show from here on out, starting with character bios culminating to the series premiere on January 17th @10/9c. Let the good times roll.

Here’s the extended trailer for the series: