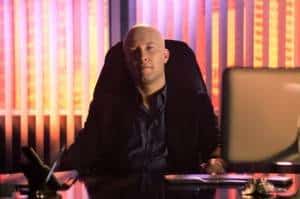 Michael Rosenbaum will be reprising his role as Lex Luthor in the two hour series finale of Smallville, which will be airing on May 13. Back when this news was first announced, Smallville producers had said: ‘It feels like the stars are aligning, literally. We couldn’t be more excited. And as far as the way he returns… there’ll be no doubt about how Lex becomes the great rival in Clark Kent’s life. He is the villain of the story.’

There’s not too much known about the two hour Smallville series finale, but it will be the culmination of ten years of getting Clark ready to become Superman. The CW also says that “Erica Durance, Allison Mack, Justin Hartley, Cassidy Freeman, John Glover, Annette O’Toole and John Schneider also star”, so expect appearances from Chloe and the Kent parents, as well as Lionel Luthor.

Below are promo photos from The CW for the two hour finale, primarily featuring Rosenbaum as Lex. This is an event that Smallville fans won’t want to miss!

A new episode of Smallville will also be airing tonight. You can view photos, a trailer and a sneak peek for tonight’s episode, as well as photos for the May 6 episode that we’ve previously posted.