ABC has released two sneak peeks for the upcoming episode entitled “3XK”. From the promo and these two scenes, it looks like we’re in for a treat like last season’s “Tick, Tick, Tick” and “Boom”. 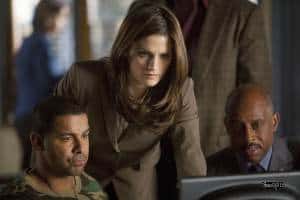 CASTLE AND BECKETT RACE AGAINST TIME TO STOP A SERIAL KILLER, ON ABC’S “CASTLE”

“3XK” – When a beautiful woman is found dead in an alley, all clues point to her being a victim of the notorious Triple Killer. The Triple Killer, or 3XK, terrorized New York City four years ago, then mysteriously disappeared. Now he’s back. In a deadly battle of wits, Castle and Beckett race against time to stop 3XK before he claims his next victims. Lee Tergesen of “Oz” (as Marcus Gates, a violent felon and prime suspect in the serial killer investigation) and Michael Mosley of “Scrubs” (Gates’ former cellmate) guest star in “3XK,” one of the most thrilling episodes of the series to date, on “Castle,” MONDAY, OCTOBER 25 (10:01-11:00 p.m., ET), on the ABC Television Network.

“3XK” was written by David Amann and directed by Bill Roe.

Is it Monday yet?