Ok, there are so many awesome things about this clip for the next new episode of Glee (airing on September 28), I’m not even sure where to start. I guess we could start with John Stamos, who is awesome and hot and cool. It’s also a scene with Brittany and Santana, which are always my favorite. Then there’s Brittany and her mad dancing skills. Seriously, why is this girl not front and center all the time?

Big thank you to E!Online for this awesome sneak peek. You can also check out promo photos we previously posted for this episode. Britney Spears herself will be making an appearance. 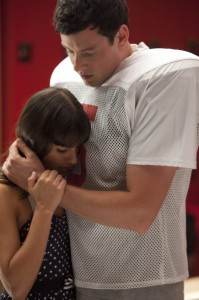 OOPS, THEY DID IT AGAIN ON AN ALL-NEW ‘GLEE’ON TUESDAY, SEPTEMBER 28, ON FOX

When Brittany and the gang try to convince Mr. Schuester to let them do a Britney Spears number, he is reluctant to go that edgy. Meanwhile, an insecure Will is curious about Emma’s new beau, Dr. Carl Howell (guest star Stamos), so he convinces her to bring him in to talk to the kids about dental hygiene. While the dreamy doc inspires the girls to take their dental health more seriously, Will is left feeling worse than before in the all-new ‘Britney/Brittany’episode of GLEE airing Tuesday, Sept. 28 (8:00-9:00 PM ET/PT) on FOX. (GLE-202) (TV-14 D, L, S)