Molly Shannon and Olivia Newton-John will both be making appearances on the May 4 new episode of Glee. We previously posted a promo for the episode and now we have a sneak peek for you below. Brittany just keeps getting dumber…and more hilarious. 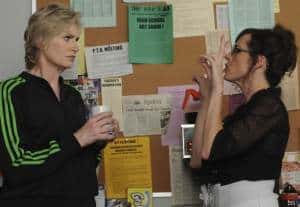 THE RUMOR MILL IS ABUZZ ON AN ALL-NEW ‘GLEE’ON TUESDAY, MAY 4, ON FOX

Mr. Schuester starts an investigation when a salacious list about members of the glee club circulates the halls of McKinley High. Meanwhile, Sue is mortified when a video of her performing the Olivia Newton-John classic ‘Physical’surfaces in the all-new ‘Bad Reputation’episode of GLEE airing Tuesday, May 4 (9:00-10:00 PM ET/PT) on FOX. (GLE-117) (TV-14 D, L, S)