Did you like last night’s Halloween episode of Modern Family? I thought it was hilarious. If you missed it, you can read Michael’s review. ABC has released a sneak peek for the upcoming new November 3 episode, which you can view below. 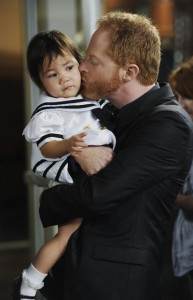 “Chirp” – Claire and Haley have a bit of quality girl time while they’re stuck at home sick, and Phil is preoccupied by the taunts of a chirping smoke detector. Gloria and Manny’s surprise visit at Jay’s work leads to headaches for Jay, and Cameron gets swept up by all the lights and cameras when he goes behind Mitchell’s back and takes Lily for a commercial, on “Modern Family,” WEDNESDAY, NOVEMBER 3 (9:00-9:31 p.m., ET), on the ABC Television Network.