Acquaman is back on Smallville on November 19. We’ve already posted a promo and sneak peek for the episode and now we have a second clip, courtesy of USA Weekend, below.

You can also read a spoiler article we posted yesterday about the return of a few old guest stars, and when we expect Chloe to come back. 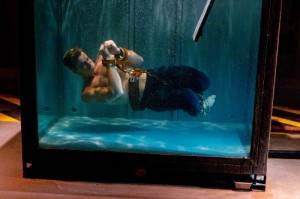 In an effort to protect the rest of the team, Oliver (Justin Hartley) decides to register for the Vigilante Registration Act to see what the government plans to do with the new law. As he suspected, it was a trap to lure superheroes to an undisclosed location where he is confined to a jail and subjected to a battery of brutal tests under the supervision of Col. Slade (guest star Michael Hogan, ‘Battlestar Galactica’).

Aquaman (guest star Alan Ritchson) and his new wife Mera (guest star Elena Satine) team up with Clark to free Oliver. Lois is frustrated when Clark continues to push aside her offers to help the team and sets out to prove she can play with the big boys. Tom Welling directed the episode written by John Chisolm.