Earlier today, ABC announced its fall schedule for the upcoming 2010-2011 season and introduced several new shows. One of them is “Body of Proof”, a new drama which will be airing on Friday nights at 9:00 p.m. The new series will star Dana Delaney (who recently starred on Desperate Housewives) as a neurosurgeon. ABC has released two clips for the upcoming series. 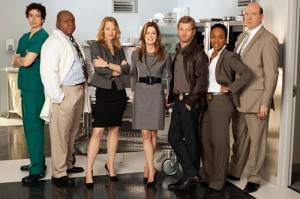 Dr. Megan Hunt (Dana Delany) was in a class of her own, a brilliant neurosurgeon at the top of her game. Her world is turned upside down when a devastating car accident puts an end to her time in the operating room. Megan resumes her career as a medical examiner determined to solve the puzzle of who or what killed the victims. Megan’s instincts are sharp, but she’s developed a reputation for graying the lines of where her job ends and where the police department’s begins. It turns out her career isn’t the only thing that will need to be rebuilt; Megan’s family has taken a backseat to her ambition, and now she’ll discover there’s a lot of work to do when it comes to dissecting her relationships with the living.

‘Body of Proof’is from ABC Studios. Christopher Murphey wrote the pilot, which was directed by Nelson McCormick. Murphey and Matt Gross serve as executive producers.