ABC’s new series “Detroit 1-8-7” will be premiering this fall and will be airing on Tuesday nights at 10:00 p.m. (see ABC’s fall schedule). Michael Imperioli, of The Soprano’s fame, returns to TV in the lead role in this new show. We have a trailer and two sneak peeks for you below, courtesy of ABC. 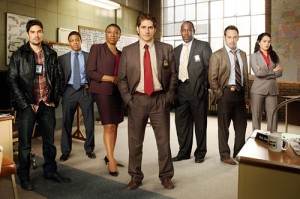 What does it take to be a detective on America’s most dangerous streets? Get ready to be part of the action when a documentary crew rolls with some of Detroit’s finest, offering an insider’s glimpse behind the curtain of a Homicide Unit. The cameras unearth the crisis and revelation, heartbreak and heroism of these inner city cops — moments of raw exposure when they address us directly, as well as private moments when they forget they’re being filmed.

There’s the damaged, but driven, Detective Louis Fitch, a wily homicide vet who is the most respected – and misunderstood – man in the division; Detective Damon Washington, Fitch’s new partner, who finds the first day on the job is a trial by fire, complicated by the imminent birth of his first child; Detective Ariana Sanchez, sexy, edgy and beautiful, has emerged from a rough background to become a rising star in the department; Narcotics undercover cop John Stone, a streetwise smooth talker, clever and quick with a smile made for the movies, is teamed with Sanchez – a combustible pairing rife with conflict and sexual tension; Sergeant Jesse Longford, a 30-year veteran struggling with his impending retirement from the force and the city he loves, and with his partner Detective Aman Mahajan – a fully Americanized son of Indian immigrants, they are an amusing mismatch of experience and enthusiasm, intellect and instinct, old school and new world, whose combined skills have never encountered a case that couldn’t be cleared; and all are headed by Lieutenant Maureen Mason, a strong-willed single mom struggling to balance home and work.

The men and women of Detroit Homicide are as smart and tough as they come. They have to be, working the neighborhoods of the once and future Motor City, a rebounding bastion of middle America still saddled with the highest murder rate in the country.

The series is produced by ABC Studios. The pilot was written by Jason Richman and the executive producers are Richman, David Hoberman and Todd Lieberman, as well as executive producer David Zabel. Jeff Nachmanoff directed the pilot.