Home
Bones
Sneak Peeks – Bones 6.01 “The Mastodon in the Room”

Bones returns for its sixth season this week on September 23. We’ve previously posted a promo and photos from the upcoming season premiere and now we have a compilation of sneak peeks for you below.

You can also read Emma’s “Previously On…Bones”, which details where the show left off last season and provides a few teasers for the upcoming sixth season. 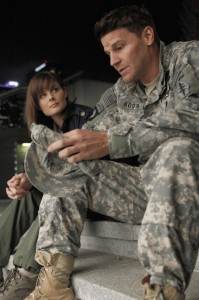 AN UNIDENTIFIED CHILD REUNITES THE TEAM ON THE SEASON PREMIERE OF ‘BONES’ON THURSDAY, SEPTEMBER 23, ON FOX

With Cam’s reputation and career on the line, the team travels from overseas to help her solve the case of an unidentified young boy. The Forensics Anthropology Unit lost much of its vigor after disbanding to pursue personal ventures, and it will take the collaborative energy and knowledge of the newly reunited team to unravel evidence and find closure for the family of the unknown boy. After unearthing new clues in the lab and making unexpected personal discoveries, the team realizes they belong back in Washington, D.C., in ‘The Mastodon in the Room’season premiere episode of BONES airing Thursday, Sept. 23 (8:00-9:00 PM ET/PT) on FOX. (BON-601) (TV-14 D, L, V)