A new episode of Brothers & Sisters will be airing on January 9. Below are 5 sneak peeks from ABC. 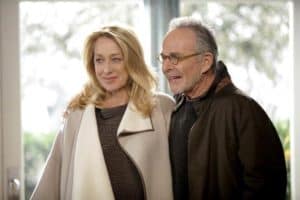 HOLLY HAS MIXED FEELINGS ABOUT LEAVING THE WALKERS BEHIND, ON ABC’S “BROTHERS & SISTERS”

“Thanks for the Memories” — While walking down memory lane, Nora and Holly have a shocking revelation about Nora’s past that may help Holly make a decision about moving away from California. Meanwhile, just as Justin and Annie begin to get comfortable in their relationship, in walks an old flame (guest starring Rob Kazinsky as Dr. Rick) who makes Justin jealous; Kevin and Scotty reconsider becoming adoptive parents; and Saul finds forgiveness in his heart for Jonathan (guest starring Richard Chamberlain as Jonathan), on “Brothers & Sisters,” SUNDAY, JANUARY 9 (10:01-11:00 p.m., ET), on the ABC Television Network.