Castle returns with all new episodes on March 8 (see when other shows return from their Olympic/Winter hiatus). We just posted promo photos for the episode and now ABC has released several sneak peeks, which are posted below. 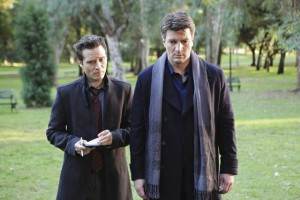 “The Mistress Always Spanks Twice” — When a half-naked woman is found covered in caramel sauce and hanging by bondage cuffs in a public park, Castle and Beckett’s investigation takes them into New York’s underground world of sexual domination. Naturally the case serves as sexy fodder for their already charged relationship banter, on “Castle,” MONDAY, MARCH 8 (10:00-11:00 p.m., ET/PT) on ABC.