A new episode of Desperate Housewives will be airing tonight (October 24). Below are two sneak peeks from ABC. 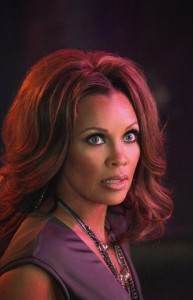 SUSAN’S DAYS AS A SEXY INTERNET SENSATION MAY BE COMING TO AN END, RENEE AND GABRIELLE REVEAL SOME INTIMATE SECRETS ABOUT EACH OTHER TO THE WRONG PEOPLE, AND BREE IS EXHAUSTED BY KEITH’S SEXUAL STAMINA, ON ABC’S “DESPERATE HOUSEWIVES”

“Let Me Entertain You” – Susan’s days as a sexy internet sensation may be coming to an end after she angers an important client and incurs the wrath of her boss, Maxine; Renee and Gabrielle are headed for a smackdown after each of them reveals an intimate secret about the other to the wrong people; Bree finds herself exhausted by younger lover Keith’s sexual stamina; Lynette is angry with Tom after he asks his mother to become the baby’s nanny without talking it over with her first; and housewife Emma Graham (singer-songwriter Dana Glover) puts on a cabaret show — with the aid of saxophonist Dave Koz — with surprising results, on “Desperate Housewives,” SUNDAY, OCTOBER 24 (9:00-10:01 p.m., ET) on the ABC Television Network.