The series final of Dollhouse will be airing on January 29. We already posted promo photos for the episode and now FOX has released several sneak peeks, which you can view below. 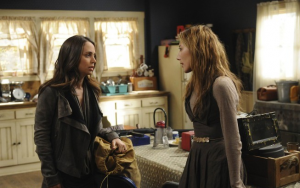 ECHO RACES TO STOP AN APOCALYPSE ON THE SERIES FINALE OF “DOLLHOUSE” FRIDAY, JANUARY 22, ON FOX

Picking up from the events depicted in “Epitaph 1,” the “lost” episode of DOLLHOUSE, and set in the year 2020, Echo and her surviving Dollhouse crew attempt to restore order to a devastating future world before mankind is eliminated in “Epitaph 2: The Return,” the series finale episode of DOLLHOUSE, airing Friday, Jan. 22 (9:00-10:00 PM ET/PT) on FOX. (DOL-213) (TV-14 D, L, V)