The seventh season of Grey’s Anatomy returns on September 23. We previously posted promo photos for the upcoming season premiere and now we have four sneak peeks for you below. 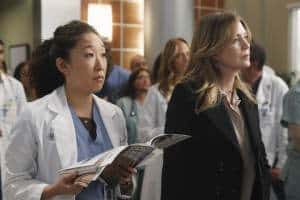 ‘With You I’m Born Again’– After an unforgettable and heart-pounding season finale, ‘Grey’s Anatomy’returns for its seventh season on THURSDAY, SEPTEMBER 23 (9:00-10:01 p.m., ET) on the ABC Television Network. In the season premiere, the hospital staff is trying to deal with physical and emotional trauma in the wake of the deadly rampage of a vengeful gunman. As Dr. Perkins (James Tupper), a trauma counselor, is brought in to help in the recovery and to assess each doctor’s readiness to return to work, Derek makes a spontaneous decision to resign as Chief and rushes back into surgery, taking everything a little too fast, and Cristina buries herself in her wedding planning.