Scott Foley will be making a guest appearance on the December 2 episode of Grey’s Anatomy and we have four sneak peeks below from ABC.

You can also view promo photos that we previously posted for this episode. 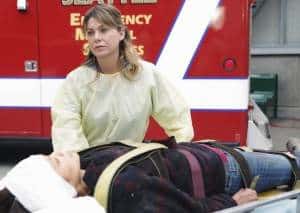 CONCERNED FOR CRISTINA, DEREK TAKES HER ON A FISHING TRIP, DESPITE MEREDITH’S OBJECTIONS, ON ABC’S “GREY’S ANATOMY”

“Adrift and at Peace” – Despite Meredith’s objections to the idea, a concerned Derek takes Cristina on a fishing trip in order to get away from it all, while Teddy, feeling directionless without Cristina, directs all of her efforts and compassion towards a dying patient (played by Scott Foley) who lacks the proper insurance to seek medical treatment, on “Grey’s Anatomy,” THURS., DECEMBER 2 (9:00-10:01 p.m., ET) on the ABC Television Network.