The Halloween episode of Modern Family will be airing on October 27. We’ve already posted promo photos of the great costumes from this episode and now ABC has released two sneak peeks. 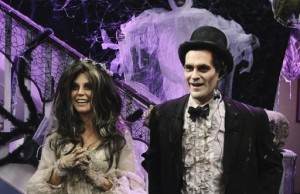 “Halloween” – Claire loves Halloween and is gearing up to spookify the Dunphy house for the trick or treaters. She gives each family member a role to play, but none of it goes quite right… Cameron can’t shake a traumatic childhood experience and hates the holiday, Mitchell has had a terrible day at work, and Gloria is acting weird after Jay and Manny teased her about her accent, on “Modern Family,” WEDNESDAY, OCTOBER 27 (9:00-9:31 p.m., ET), on the ABC Television Network.