The mid-season finale of Modern Family will be airing on December 8, and then the show will be on a short hiatus until January 5. Below are three sneak peeks and a synopsis from ABC. 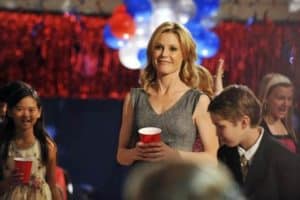 THE SCHOOL DANCE BRINGS ON MORE ANXIETY FOR THE PARENTS THAN FOR THE KIDS, ON ABC’S “MODERN FAMILY”

“Dance Dance Revelation” – It’s Luke & Manny’s first school dance and everyone gets in on the “fun” — Jay and Phil have to take the boys on a mall run which becomes quite stressful; and Claire revels in the school dance committee duties, but gets a little jealous when Gloria shows up to help. Meanwhile, Mitch and Cam are horrified to learn that Lily is biting other kids on the playground, on “Modern Family,” WEDNESDAY, DECEMBER 8 (9:00-9:31 p.m., ET), on the ABC Television Network.