A new episode of Pretty Little Liars will be airing on July 13 and we have two sneak peeks for you below, along with a short synopsis for the episode. 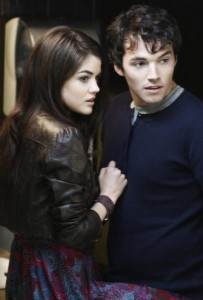 LIKE A MOTH TO A FLAME, A LITTLE LIAR MAY GET BURNT BY THE FIRE, IN AN ALL-NEW EPISODE OF “PRETTY LITTLE LIARS,” PREMIERING TUESDAY, JULY 13TH ON ABC FAMILY

Burbank, CA (June 23, 2010) — The homecoming dance is supposed to be a time for fun and making memories, but for four Pretty Little Liars some disturbing secrets threaten to ruin their perfect night, in “There’s No Place Like Homecoming,” an all-new episode of ABC Family’s original series “Pretty Little Liars” premiering Tuesday, July 13th (8:00 — 9:00 PM ET/PT).

The homecoming decorating committee is knee deep in balloons, and girls are jockeying for position to be the queen, while four friends from Rosewood just try to stay afloat. Dealing with heartbreak, a boyfriend’s virginity pledge and a vengeful sister all take a backseat when one girl makes a shocking homecoming date choice that puts her in a possibly sticky situation. Will the girls be able to protect one of their own, or will the evening turn out to be a night they can never forget?

RCA Record’s 2AM Club will be performing songs off their debut album, “What Did You Think Was Going to Happen?,” at the Rosewood High School Homecoming Dance.