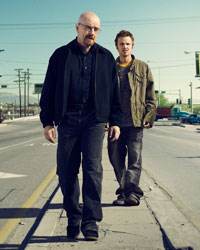 It’s amazing what Bryan Cranston can do with a simple expression. Case in point: this clip from Sunday’s all new episode of Breaking Bad on AMC, “Caballo Sin Nombre.” Without a doubt, Walter White is one of the most vivid characters on television, and Breaking Bad is one of the biggest tests of moral boundaries on TV. In this clip, Saul visits Walter in an attempt to calm his nerves and get him back in business. I have to say, Saul does a pretty good job of easing our fears for Walter – after his spiel on “Blowback,” I have a feeling Skylar will think twice before turning Walter in. Then again, Breaking Bad has earned its reputation by going where no-one thinks it could possibly go.

Despite ever-increasing tension between Walt and Skyler, he pulls out all the stops in an effort to reconcile with the family. Elsewhere, Saul is instrumental in getting Jesse involved in a most-unusual investment opportunity.

Did Get Out Deserve Its Academy Award Nominations?