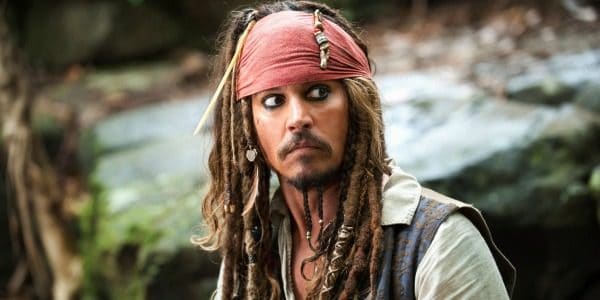 At some point someone might have to wonder if Johnny Depp is truly losing his mind or if he’s some kind of weird, twisted genius with a serious dark streak that runs through his sense of humor. Thinking about a Michael Jackson musical is one thing, but basing the entire production from the point of view of a sparkly glove, one of Jackson’s trademarks, is nuttier than anything Captain Jack Sparrow could possible think of. For the Love of a Glove: An Unauthorized Musical Fable About the Life of Michael Jackson, as told by his GloveÂ is at this time on track to be released in Los Angeles this coming January, and if you’re not shuddering at the title or at the very least cocking your head in confusion then quite honestly you don’t care or might share the same twisted sense of humor that could allow you to see such a production as noteworthy. Just considering that Depp will be going deep into Jackson’s life, scandals and controversies included, is more than a little disturbing since the documentary Leaving Neverland was already blasted by more than a few people willing to give a piece of their mind. In fact, after learning that his name had been somehow attached to this controversial project, Corey Feldman had this to say on Twitter as per Jeremy Dick of MovieWeb:

“DEPP-SPRATE MOVES: WTF DID I JUST READ?!? IS THIS REALLY A THING? AND WTF IS WRONG W DEPP THAT HE WOULD WANT 2 PRODUCE THIS?? TONE DEAF & TASTELESS? THIS 1 TAKES THE CAKE! ID NORMALLY KEEP MY OPINIONS 2 MYSELF BUT WHEN MY NAMES AN INGREDIENT, I GOTTA CHEW!”

Johnny Depp has made a career out of being eccentric and hard to figure out at times, but this really seems to go beyond the pale since Michael Jackson’s life and reputation was already under assault when he was still alive. As of now one would think that showing at least a moderate amount of respect for the deceased would be something that many would be willing to consider, though looking at this such a thing just isn’t in the cards at this time now is it? There might be some people that would still respect this and want to stomp a little harder or even moonwalk over the King of Pop’s final resting place, either metaphorically-speaking or in real life if they wouldn’t get busted in the process, but no matter what happened while he was alive the man is gone at this time and as such it’s time to move on. The truth that there was a great deal of controversy when he was alive isn’t something to forget, but shining a spotlight on said controversies again and again shows that society needs something juicy and possibly rotten to chew on to make themselves feel better now and again. Those that would state ‘oh it’s just satire and theater’ aren’t wrong by any means, but there is a time and place for everything, and despite the freedom of artistic expression one opinion, as no doubt will be echoed by many, is that Depp is digging himself a deeper hole in which to continue burying his reputation.

Doubtless there will be a great many people that want to see this is if only out of sheer morbid interest and a desire to know just what it is that others are talking about, but in a big way Depp is taking a risk when it comes to using life-sized puppets of various celebrities and personalities, and narrating the story from the point of view of the glove does make it sound as though he’s gone off the deep end without looking first. Ryan Lattanzio of IndieWire has more on this topic.Â One could wonder what’s going wrong or what many celebrities are thinking when such a thing as this happens but one could just as easily wonder, in a very odd and disquieting way, just why anyone would continue to unearth Jackson’s life in such a way when there is bound to be controversy no matter what is said or done. Those that were directly involved in the scandals and controversies have every right in the world to let it go or continue the discussion, but it doesn’t mean that the rest of us have to listen. And yes, Depp does have the right to do what he feels is going to be entertaining, but it’s a big hope that many people would look at this attempt and simply shake their heads either in pity or in amazed wonderment at just how, and possibly why, the aging star decided to go along with something that’s less than respectful and seems bound to become popular only because people are so willing to feed into any and all drama concerning celebrities.

I still have some respect for Depp for his many accomplishments, but in moments like this it’s enough to take one step back and appreciate him from afar.