ABC Has released a new promo poster for the sixth season of Grey’s Anatomy. While the poster doesn’t feature any of the Grey’s Anatomy cast members, it does capture Seattle’s characteristic gloom. (Or maybe stereotypical gloom would have been a better term.) Click ahead for a really big look at the poster, along with a few details on season 6 of Grey’s Anatomy. 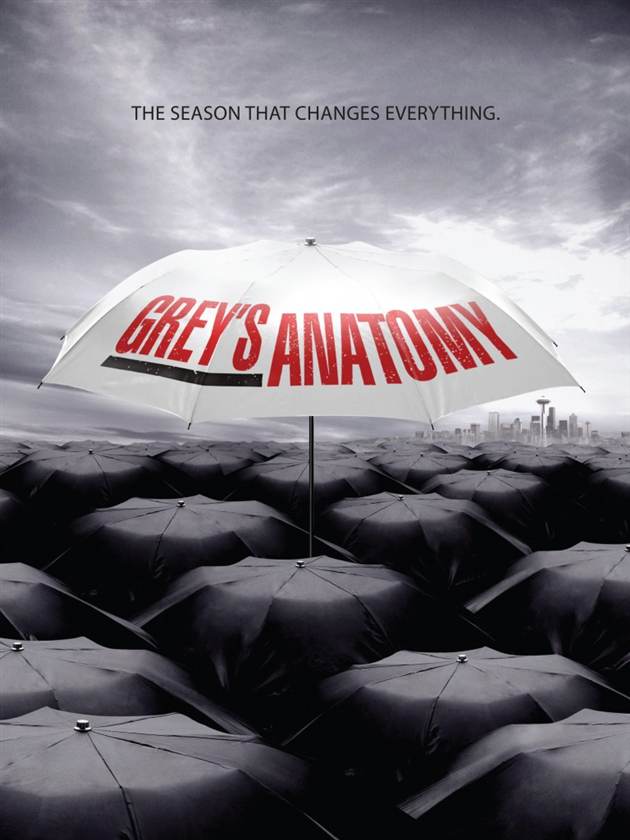 Here are some details on what is in store for Grey’s Anatomy’s sixth season, straight from ABC.

Seems like the doctors of Seattle Grace Hospital are always fighting for something, from access to cutting-edge surgeries to relationships to patients’lives. And they don’t always win.

After a long, hard struggle, Meredith Grey (Ellen Pompeo) and Derek Shepherd (Patrick Dempsey) may have finally won the battle for each other’s hearts, sealing their love with vows written on, of all things, a blue post-it note.

One battle the staff of Seattle Grace may be losing is saving the lives of two of their own, Izzie Stevens (Katherine Heigl) and George O’Malley (T.R. Knight). And Alex Karev (Justin Chambers), Izzie’s new husband, is left holding his breath until next season’s premiere along with the rest of us.

Tough-loving Dr. Miranda Bailey (Chandra Wilson) is fighting her own battles. She faces the very real possibility of losing her husband over her extreme dedication to her career.

Callie Torres (Sara Ramirez) is fighting for her family’s respect and support as her new relationship with Arizona Robbins (Jessica Capshaw) blossoms into the healthy romance she needs.

Mark Sloan (Eric Dane) is trying to overcome his past life as a lothario and become a better man–with or without the help of Lexie Grey (Chyler Leigh). Perhaps Lexie is too young for him after all.

And Richard Webber (James Pickens, Jr.), The Chief, is fighting to keep his hospital together and to find some way to forgive himself for his past mistakes.

Grey’s Anatomy can be as complicated as any neurosurgery, with episodes that will make you laugh out loud, cry your eyes out and cheer its victories–whether they involve saving a patient’s life or sealing that kiss we’ve all been hungering to witness.