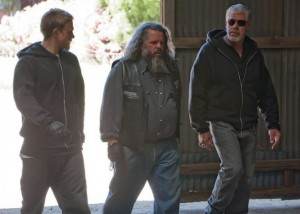 This season of Sons of Anarchy set up a plot-line that’s only just now starting to really pay off the way it should. Following the excellent season opener, the fourth season of Sons of Anarchy hit a bit of a lull. You could call it a slow-burn, but there’s a difference between building and meandering. For a few episodes this year it was more like meandering, but now here we are in one of the best episodes of the season. Almost every member of SAMCRO had screen-time in this outing which was very much appreciated compared to some recent episodes. Juice’s woes toward unwillingly betraying the club continue to grow while he’s forced to watch Miles and a couple of prospects take the potential blame for last week’s missing kilo of coke. Not to mention we had the return of crazy porn star Ima, Piney flattening Opie for betraying he and Lyla’s marriage, and Clay setting up a hit on a main character that’s been a long time in the making.

The biggest shock (?) of the episode would be how the Juice situation with the missing brick was resolved. I think pretty much everyone expected for there to be some sort of bloodshed, but it was all just a matter of who it was going to be. Gotta give Juice credit for at least trying to get the brick back before anyone paid for his actions–doubt anyone would really miss Miles like they would Juice in the first place though. The drama at the warehouse afforded Theo Rossi a great scene with Tommy Flanagan about the necessity of always abiding by club law even when it doesn’t always fit your own personal ideals.

What’s really interesting about this whole Juice situation regarding his mixed-race heritage being treated as this possibly deadly secret would be the likely severity of the consequences. When it’s implied that Juice would be thrown out by his so-called brothers, I believe it’s entirely likely. The fact that they would do so? It’s massively hypocritical. When Chibs was talking about picking and choosing the club laws they’d follow I just couldn’t help thinking about Clay’s decision to even get them into drugs in the first place. Everything about it goes against the very guidelines the club was built on decades ago. Yet because there’s a massive profit to be made (despite the fact I’m positive Miles won’t be the only one to die as a result of this particular deal), it’s okay to forgo that club standard. Clearly it’s just Clay who gets to pick and choose what standards the club should have.

What’s so contradictory about the fact that these men still see themselves as family is that status is completely conditional and explanations are never allowed. No matter how often members of the Sons have found themselves under pressure from various branches of law enforcement, they’re far more concerned with outing and snuffing the rat than with trying to understand the nature of the situation that person was involved in. At least some members realize that what they’re in is a gang more so than a club, now more than ever. We’ve already seen how the tensions existing between the group members are so easy to exploit. It’s why I believe Linc Potter’s methods (who sadly was not in this episode) are what’s going to get very close to tearing the club down this year. 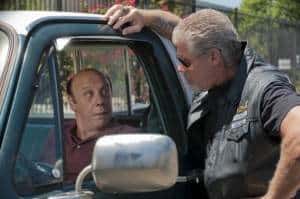 The moment that’s going to propel the upcoming action would be Clay setting up the hit on Tara with Romeo of the Galindo cartel. I love how Clay handles his business, because he makes sure that it looks like he wasn’t involved. True, the John Teller situation coming out, even after all these years, is coming around to bite him. However, the way this hit on Tara is being set up does have the potential to keep blame away from Clay himself as it’s well-known how unstable business relationships can be with such a dangerous organization like the cartel.

Following the events of last week with the letters, Unser’s expressing his guilt about his involvement in John Teller’s death by trying to keep Tara from harm’s way. Of course he’s putting himself right back on Clay’s bad side in the process. That’s another thing about this show, the relationships between characters constantly so tenuous. One minute the club’s all smiles while they throw back beers together at the clubhouse, and the next, somebody’s riddled with bullets. That goes for more than just the actual SAMCRO members too as the old ladies had their fair share of drama this week as well. It also illuminated how I really feel about the possibility of Tara winding up dead before the season’s out.

This might be unpopular opinion time, but this was the episode where I realized that I don’t care if Tara Knowles dies this year. It might even be for the best in terms of the story because she has turned into a fairly useless character. I get that she was on-edge after dealing with the return of porn star Ima, who had spent the night with Opie in the episode prior, (this was the porn star Jax slept with once as well). But her attitude toward Lyla afterward was completely uncalled for. Lyla has never done anything to Tara but be supportive, friendly, and she’s never been with Jax. I get that Tara was reacting to the very nature of the women that hang around these men as well as how the men treat women in turn, but I’m sick of this holier than thou attitude Dr. Knowles has adopted within the club’s old lady social structure. That’s not even why she needs to go. If someone really looks at what her character brings to the table on her own merit at this point then I think they would have a hard time justifying her existence within the story. Especially when her demise would do so much more for the dramatic potential in the series. 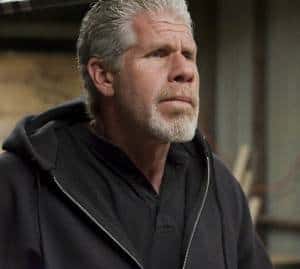 When a character purely exists as a facet of another character’s overall arc then it becomes questionable as to how necessary that character is. Tara has become either the requisite maternal figure of Jax’s children, or the doctor that patches up any member of the club when they get shot/stabbed/beaten. So if you then look at what her demise would bring about, well potential is far too immense to ignore. The conflict between Jax and Clay would reach an incredible point wherein the story could never be the same. It’s not something that Gemma could easily forgive Clay for either. Sons of Anarchy definitely has come to that point in the show’s own history where a big shake-up is going to have to happen soon to keep the show fresh and interesting.

‘˜With an X’definitely set a higher bar again for the series and I hope that future episodes in this season reach the same caliber. Following Juice barely scraping by with his life in this episode, he may have only gotten lucky once. If he continues to work with the law against his ‘˜brothers’in the club then it’s a matter of time before he finds himself on the end of the same sort of relentless onslaught of violence that Miles met even after he was already dead. I think Happy’s moment of overkill toward Miles’fresh corpse perfectly encapsulated how quickly the attitude of the club will change toward any one of its members when any kind of perceived betrayal goes down. It doesn’t matter at that point who they are.