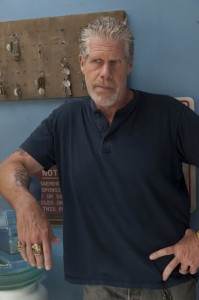 It’s all been building to this, the fourth season of Sons of Anarchy has roared along at a fairly steady pace with the occasional bursts of violence as the club tried all season to adjust to working with the Galindo cartel. Now the reaper patch on the back of the club’s cuts went from ominous symbol to a reality as one of the main characters from day one met his maker in last night’s episode. If you don’t want to know who that was, I suggest you take a nice bowl of good old-fashioned family recipe chili and sit this one out, because this is a death that’s going to finally kick certain former conflicts back into gear.

Rarely does an episode of Sons of Anarchy forgo the usual montage opening twice in a row in favor of pulling us right into the action, but this week found the opening moments taking place exactly a few seconds after Juice made his decision to hang for his crimes against SAMCRO at the end of last week’s episode. If you waited and heard the branch snap last week then you weren’t surprised to see Juice hobble away from the tree when Chibs and Tig showed up. Juice himself could barely even pass it off convincingly that he’d just been involved in an accident, as evidenced by the look of concern Chibs gave Juice once he had inspected the ligature marks on Juice’s neck. There’s certainly no sense that any of Juice’s guilt has been alleviated following his attempt and it would be wise for Chibs to keep an eye on his fellow club brother so he doesn’t try again.

I doubt that Juicy boy will have a spare moment for a while in order to scramble up another tree, however as the club didn’t even get to handle their voting business before bullets ricocheted through the club’s meeting room. If that didn’t just drive home the point that all this outside gang and cartel drama is doing the club in by preventing them from handling their own business, then maybe a bunch of severed heads (one of those being the head of Armando, the leader of the SAMTAZ chapter of the club) in the back of their assailant’s vehicle will. There have been a number of competing storylines this season and in some episodes that has shown itself to be a real problem for the balance and tone of the show’s plot. But in this eighth episode, things are finally being shifted around in a way that allowed for most of the storylines to get their moment and advance. We even got to see the garden fund-raiser happen (the one Gemma was in the flower shop speaking to Rita about it way back in the start of the season) and Clay convinced his old ‘˜friend’Elliot Oswald to contribute a decent sum of money with him so they could throw another obstacle at the Charming Heights development. Remember how that’s still something that’s happening? Honestly, if you had to take a minute to let that storyline come to your mind again away from all of the guns/drugs/letters shenanigans of the season, I don’t think anyone would blame you. But something as a result of those letters has finally happened without consisting of Gemma and Clay fretting about them or fake death threats being issued to get Tara aware of the danger coming her way. 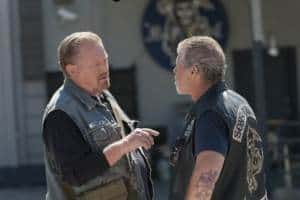 Piney has been challenging Clay lately and he paid the price for it compliments of being on the business end of a shotgun. Ever since it got out that a character would wind up dead this year it shouldn’t have shocked anyone that it would be Piney. He’s been as vocal in voicing his dissent as Bobby, but he actually had something to hold over Clay’s head with the knowledge of those letters. From the first time he tried to control Clay’s actions within the club (specifically regarding getting the Sons out of the drug game) I knew it was just a matter of time before he met his demise. He showed all his cards with the very man who had no problem with setting up the death of his own best friend, so how else was it supposed to end? But at least the positive thing about Piney’s death is that it’s going to be the level of death that can’t be ignored by the club. Only so many people know about Piney’s cabin so when his body is found I would hope it would get Jax to change his mind about his position in all of this because he flatly refuses to take any sort of stand as it is right now.

Before Clay showed up, Jax came and spoke with Piney briefly. It was great seeing Jax snap at Piney and, in a way, the audience when he told Piney that he wasn’t the same man as his father and to stop putting all the pressure of the club’s history and its future on his shoulders. Hunnam finally got the chance to wake up this season after fading off into the background for episodes at a time as he got the chance to imbue the desperate spirit of a man who’s just so fed up with the expectations everyone has toward him. Jax doesn’t want to save the club all he wants is to survive day-to-day, to provide for his family, and to get the hell out in one piece. I know Jax pledged his support to Clay this year, but if he really believes that having him remain president will be the best thing for the club in the future after the cocaine drama settles down…I think he only needs to believe that so it will make walking away (and putting the safety of not only his brothers in the club but his mother as well in Clay’s hands) easier to do.

Clay certainly has the potential to be a better war-time leader for the club, but let’s not forget he was the man who put them in the position to have to fight for their lives in the first place. Tara may now be temporarily out of harm’s way, but there is no doubt in my mind that Clay is still gunning for his possible future daughter in law just as much as he has been. Jax needs to realize that in order to protect his chosen family of Tara and the two boys, well; he’s going to have to eliminate Clay. Just about the only way that might happen with little chance of repercussion, tragically would be taking a page from Clay’s own playbook and making any sort of harm that could occur to his step-father look like an accident. Nothing quite as dramatically rich as the son being forced to repeat the sins of his (step) father. These two men can’t continue to exist for much longer, and I really wish that Piney would have had some sort of actual proof to show Jax about what kind of man Clay Morrow is. Hopefully, the fight for the SAMCRO throne isn’t over and we’ll get that deciding vote. But to whomever wins, Clay or Bobby, it’s going to be a very hollow victory indeed as the club has a lot of bad road ahead of them–very likely lined with more tombstones along the way.