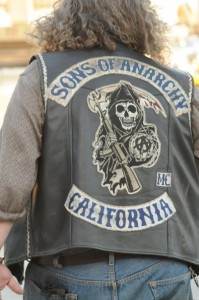 At this point it’s not clear what’s going to unravel SAMCRO this season, the law or themselves. Specifically Clay who is making it more clear by the week how he will do anything to protect the deal he’s put in place with the cartel. Meanwhile Jax is off making promises he can’t possibly keep in order to try to get the drug-running vote handled so they can all focus on just making runs and hoarding cash before the bottom falls out.

What’s interesting about this season is the way in which without any road-trips or real rivalry with another gang to worry about, we’re finally seeing some of the Sons get the spotlight more than in the past. Throughout the show, various members of SAMCRO have gotten moments to stand out, but in this episode in particular we were given a chance to really see what some members are made of. Obviously Juice getting picked up by the cops and threatened with the truth of his heritage is a ticking time bomb situation. He was the one after the boys gunned down the Russians who looked the most disturbed by what he’s just done. I think he may be the weak link that they tried to turn Opie into way back when Agent Stahl was a threat to SAMCRO. Juice is young and he has the potential to be pushed into a corner, it was a smart choice on Linc Potter’s behalf to target him first.

In fact, I think that Potter has the patience, skill, and intelligence to get further in a case against the Sons than any other Fed or cop has before. For one thing he has the advantage of making Officer Roosevelt his errand boy–probably one of the late Agent Stahl’s biggest errors was her ego making it so she had to make sure they all knew the face of the person who was after them. It’s classic to have the face of the local law be the one despised by the enemy while the real threat to the club’s well-being is working behind the scenes. I wonder if the show will pull the trigger on actually enacting the RICO investigation–hauling people in and such to finally make the Sons and their associates accountable for the various crimes we’ve seen them commit over the seasons.

As the vote grew nearer there were a few hush-hush deals being made by both Clay and Jax. First of all I was pleased that Bobby ultimately stood his ground and didn’t give Clay his affirmative vote–proving if anything that he really is the man who should be running the M.C. after, (if?) Clay retires. At least he’s sticking to the core of what the club really is supposed to be about. Of course, he just put himself in danger by denying Clay his support when he said he would–Tig is supposed to be a second-in-command and yet he’s been passed over by Clay a few times this season so far. And Jax wants Opie to be the president of the club, so he actually was capable of convincing Opie to say yes in the vote. All this bad blood could mean we’re going to see the Sons turning on each other in the coming power struggle that’s being set up for the position of club president.I mean, it’s sort of odd to sit and think about what a dangerous undertaking being in SAMCRO is and yet we’ve only really seen one of the recurring club members be killed off. 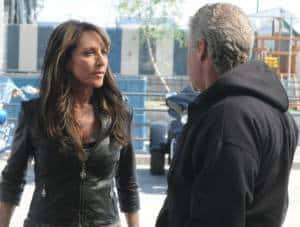 Or maybe it won’t be a member of the club who bites the dust. Tara is certainly going to be an ongoing nuisance in Clay’s eyes, especially with her possessing those oft-talked about letters from John Teller in addition to police reports about the scene of his death. It’s not like they haven’t offed an old lady before either as we saw with Opie’s late wife Donna. I’m betting that Jax is ultimately going to find himself in a situation where he decides to stay on and try to guide the club from within, much to Tara’s chagrin. Someone needs to be able to keep Clay from going completely off the rails in pursuit of financial security–there’s still a lot those old hands of his are capable of doing before he takes his cut off for good. Clay confronting Gemma before the vote may have been tense to watch, but it was exactly the type of thing he would do right now. True, it was a violent thing to do to someone you love and who has been a victim of horrific violence in the past, but she really does get it in her head that she’s on the same level as he is. But it fit with Clay’s whole bit of isolating himself further away from the club and his family by telling her to back off of his business. Right, like anyone ever says no to Gemma and she actually listens.

The episode set up a lot of ideas of what could go wrong in their new business venture. Being on top just means that everyone wants a piece of you, and I believe that this year is going to be the Sons most perilous one yet. Also, I have to make special mention of why the episode is called Dorylus. That’s the genus name for flesh-eating red ants. And we got to see just exactly what happens when you find yourself on the bad side of the local Native American tribe where, it just so happens, the Sons get their ammo. So just go ahead and add that to the list of things that can go wrong along with: rival gangs wanting the money from the guns/drugs, the stock of either the guns or drugs getting randomly stolen, or the cops happening on SAMCRO’S stash during transport or storage. I wonder how the problems with Clay’s club-fracturing deal will make themselves known next week, and if the members will start dropping like flies soon.