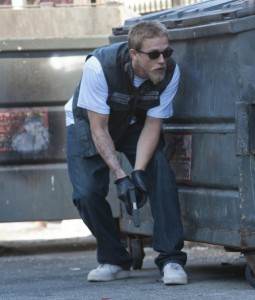 A death threat, a drive-by, and an officer challenge. Do any of those scenarios sound good to you? No? Well that’s because the good ol’days for SAMCRO are in the distant past and it’s just been one mess after another for the club as last week’s stolen cocaine drama would prove a harbinger of more trouble to come. Nobody was cracking wise or having fun as ‘˜Fruit for the Crows’showed the Sons starting a downward spiral of from bad to worse as their lives were unexpectedly endangered. The club itself also experienced what could well be its most historic moment yet: the possible impeachment of founding member and president, Clay Morrow.

As soon as Bobby said those words and opened up the floor for a vote to pull Clay out of the president’s seat, I had mixed feelings of course. Okay so say everyone does actually turn on Clay and boot him out of that position of power…well it doesn’t change the fact that in order to survive the Sons would have to engage in all-out war against the Galindo cartel. As they would likely try to stop being involved with the drug trade, but unfortunately the entire deal with the cartel is a massive catch-22 with no easy fix. I think the boys have realized that it’s a ‘˜too little too late’situation as they can only desperately try to change club leadership and hope some advantage will come of it.

For the sake of mounting dramatic tension, it’s been satisfying to watch Clay get the club in deeper by the week; it’s certainly provided some good action-packed stories this season. But if this type of vote could have been called on at any time then why the hell didn’t Bobby, or someone else, do it sooner? Chalk it up to the disaster of bloodshed in the apartment following the drive-by shooting, as well as a general feeling of desperation with how the club has found themselves –with targets constantly on their backs. Not to mention, we know that such a vote won’t undo the secret hit on Tara that Clay set up with Romeo last week. Trust me, it was beyond entertaining this week to see Clay show his sympathetic and protective side to the woman whose death warrant he gladly signed. 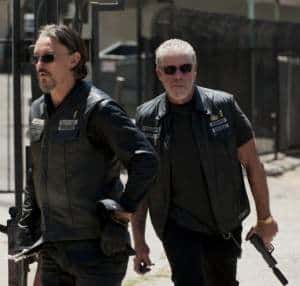 Tara’s not the only one in immediate danger either as Clay saw through Unser’s ruse to try to get the authorities keeping an eye on Tara and the club as well. We did get to see the genuine sympathy that Roosevelt is capable of having toward someone who’s close to the club. He’s not morally apathetic toward these people as that’s clearly Linc Potter’s territory. One way or another this year, someone’s going to die because of this whole J.T. letters plot device by season’s end. I was pleased to have a break from that situation, for the most part in this episode, as it’s mostly proven to be a hand-wringing distraction for our favorite characters, all so they could avoid dealing with the real issues of the cartel and the strain on the club.

One character who’s managed to have plenty of problems this year without a single moment of being involved in the letters drama would be Juice. Again, Roosevelt was forced to act the part of bad guy on behalf of Linc Potter at the threat of harm to his career as he reluctantly perpetrated entrapment on Juice in order to gain more leverage. All of this pressure, as well as the guilt over Miles winding up in the shallow grave that should have had him in it instead for the theft of the cocaine brick last week, led Juice to make a desperate choice. Sons of Anarchy isn’t exactly the most subtle show on television, so when you think of Juice ‘˜lynching himself ‘˜before the club could for betraying them–that’s exactly what happened as he attempted to end his life via makeshift chain noose and a tree branch as the episode faded to black. We all heard the branch snap, but if Juice is so far gone that he’d do that to himself in the first place then his living through it is going to result in either: a reckless man fighting for his life, or someone who’s just plain reckless toward the club and its members. Either way, now that the drama is finally past the point of simmering into a full-on roiling boil, I’m highly anticipating next week’s episode and the eventual casualties that have to come down the line this year. The Sons are starting to drown in blood already and soon it’s going to be more of their own.