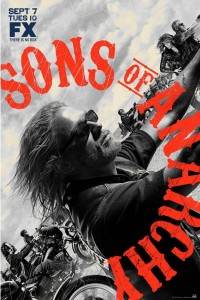 The third season of FX’s highest rated show, Sons of Anarchy, will be coming to DVD and Blu-ray on August 30.

Starring Charlie Hunnam, Ron Perlman and 2011 Golden GlobeÂ® Award-winner Katey Sagal, Sons of Anarchy focuses on a motorcycle club who will stop at nothing to protect their small town against drug dealers, law enforcement officers and corporate developers, while also continuing to deal illegal arms.

In season 3 of the show, Gemma was framed for murder, while Jax’s infant son was kidnapped. Abel’s trail led SAMCRO to Ireland where many secrets were revealed.

The season 3 DVD and Blu-ray sets will include all 13 episodes of the previous season, along with the following special features:

Amazon is already taking price guarantee pre-orders for the Sons of Anarchy box sets. You can order the DVD here

and the Blu-ray set here