For the past four seasons now, Jax Teller has wrestled with facing his destiny within SAMCRO. He alternated between struggling against Clay to reluctantly working with him during the various pursuits and endeavors of the club. But that all changed last week when the truth that was revealed to Jax made him realize that Clay’s continued existence was of detriment to his club and his family–it was up to Jax himself to eliminate this problem. Instead of making this episode’s plot an easy A leads to B which causes C route, Sons of Anarchy decides to make quite a tangle out of the potential deal with the Irish and Galindo cartel. The show is all the better for it, as one twist manages to help force Jax to finally come to terms with his fate in the club. 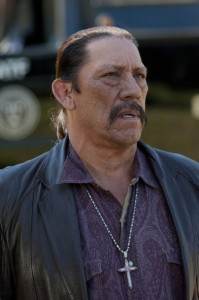 Just as Lincoln Potter and his team were preparing to enact the RICO bust on the Irish, the Sons, and Galindo, the audience might have been preparing for an hour full of violence, busts, and severe consequences that had been teased all season long. What happened instead consisted of Romeo and Luis showing up in league with the CIA to promptly close the RICO bust down. It turns out the CIA plans to subsidize the cartel and they need the coke money and Irish guns to do it. Essentially, the Sons have unknowingly gotten themselves into bed with the government, but not at all in the prime position. Conceding his loss of the RICO charge, Lincoln gives the file information on Juice’s parentage to Eli and the two shake hands and part ways.

Just as Potter said before he walked away from something he worked thousands of man hours putting together, the Sons are truly on the losing end of this and they don’t even realize it yet. I was beyond pleased with this development, it put a brand-new spin on so much from the season, including the supposed attempt on Tara’s life. Even before Romeo said it to Jax in private later on, I knew that it just meant that once again Tara suffered for nothing all because of club business.

Jax Teller: Force to be Reckoned With

As Jax ran around and tried to handle all of his business before leaving town, (or so he thought he would) Charlie Hunnam’s portrayal brought a real sense of dramatic propulsion to the episode as a whole. We followed Jax from the botched meeting, to the site of his father’s gravestone, all the way to a menacingly seething confrontation with Clay in the hospital. From the moment Clay made the mistake to dare utter the word ‘˜son’in Jax’s presence I knew that the threat to Clay’s life was going to be much more personal. Anytime that Jax gets to pull out his trusty knife you know that something is going to go down…except for when it doesn’t.

See, the Irish refuse to meet with anyone but Clay to work out the deal with the cartel. That deal happening is the only thing keeping the RICO charge off of the Sons’collective backs so it has to happen soon. Thus, much to the chagrin of Jax (and Opie, Tara, Gemma…) Clay Morrow has to remain alive for the time being. Jax is forced to step up and take his place at the head of the Reaper table with the gavel clutched in hand. This truly led to some of the finest work Hunnam has ever put in on this series. Much of it so understated in its presentation, but you can feel that there’s a man screaming on the inside with regret and the desire to be able to escape what’s been promised to him practically since birth.

For example, the aforementioned scene at J.T.’s grave was a perfect representation of these feelings as Jax took the rings from his father’s tombstone, tried to wipe off the tarnish on their surface, and walked away with nothing but an apology to offer his father for what he’ll have to do next by keeping the Sons in both of the businesses that John died to try to pull the Sons away from. Something that was driven home by that haunting final image of Jax and Tara posed at the head of the table morphing into that of the old photograph of John and Gemma doing the same thing. The series doesn’t ascribe to the fact that anyone can learn from their past, as outside circumstances work to keep certain elements repeating themselves over and over.

Big Changes for SAMCRO, None for Charming 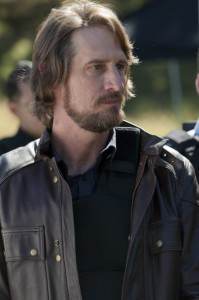 As the club found itself altered and minus a few members by season’s end, the town in which they’re based resisted the changes that would have been implemented by the Charming Heights development. It would seem unimportant to mention except for the way in which it was halted was an incredible final strike made by Linc Potter during his brief stay in town. The eccentric flourish of hauling out the duffel bag of erotic accessories, made by the crime family that became the sole financial backer of Mayor Hale’s proposed development, was pure Potter all the way. Down to the venomous way he explained why he had to stop it from happening right to Hale’s face. The new season will have enough changes on its plate with the club, so it’s best to not have to worry about the town becoming something else entirely. It was a smart decision to put the kibosh on Charming Heights.

Regarding SAMCRO, the club is damaged there’s no doubt about it. Jax will likely try to do his best to encourage a more honest SAMCRO after the mistakes of Clay’s leadership technique. But it’s pretty apparent that he’s going to find himself in more and more difficult positions that he’ll have to navigate his club through. Not to mention, Bobby’s still in the slammer, and Opie wasn’t at church by episode’s end so their futures with the club are in question. The entire tracking shot of Jax going from the repair shop to the clubhouse and finally to sit at the head of the Reaper table should go down in SOA history as one of its defining moments. Perfectly executed in every way, as each step Jax made held the weight of the world on his shoulders–a man with the fate of this club in his hands. It’s time to see what kind of club president he’ll really get to be now that the gavel is his. No one should count Clay out yet either. I’ve said it before and I’ll say it again, if Clay’s alive then he’s a threat. Especially now that his throne has been usurped.

With the club in flux as drugs and guns remain a reality for the boys (and old ladies) of SAMCRO it’s going to be great to see where the show’s creators take the series from this point. I for one am beyond excited to see how Jax takes to wearing the crown, and how it affects his relationship with Tara despite her pledge of allegiance to him in the final minutes. All in all, this season had its slow moments in the middle but the last batch of episodes wound up being among the show’s very best. I’d take any one of the last few episodes over almost all of season three any day. Maybe we’ll even get to see Sheriff Roosevelt next year as well, as I feel that he was pretty underused ultimately so that the other plots could be better serviced. The Sons barely made it through this season–can’t wait to see how they fare in season five.