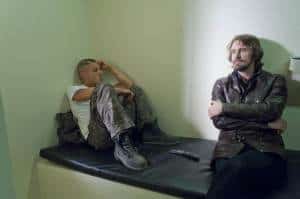 Sure, bullets flew this week on Sons of Anarchy but the true action happened within a series of conflicts between the show’s core couples; boy was it ever ugly too. If it wasn’t Tara’s breakdown at the hospital with Jax at her bedside following a botched abduction attempt compliments of Clay’s phone-call last week, then it was the final nail in the coffin for Clay himself ever again being seen as a redeemable figure on this show. Oh, and Juice is a full-fledged rat for the Feds now but in comparison to everything else that bears little mention except to say that Sheriff Roosevelt also wanted to stop working with Linc Potter–his efforts were dashed by the conniving Potter just as Juice’s were.

The episode opens with Clay getting quite a lot of money from his private safe which rouses Gemma’s suspicions, but surely because Clay swore nothing would happen to Tara last week then he’ll keep his word, right? Until something happens to Tara, that is, something quite life-changing for her as a result of Clay’s actions. It was all supposed to be so easy, Tara was meant to head up to Oregon and a job interview at another hospital all on her own. The hit would go down and it could easily be made to look like something that happened as a result of the tensions between the Sons and Lobo Sonora. Trouble is, Jax decides to turn this trip into a family outing, as he puts it, and all Hell breaks loose as Clay’s machinations clash right against this idea of Jax Teller: civilian family man.

From the moment their peaceful trip was violently interrupted all the way into the aforementioned scene with Tara in recovery at her own hospital back in Charming, these scenes showed that Jax isn’t going to get to leave SAMCRO. Sure, the idea of this idyllic life with his darling wife and two sons is the kind of picture that Jax has had in mind all season once he gets that clichÃ© ‘last deal’ handled. It’s what’s motivated him to stand by and support all of Clay’s bad decisions regarding the cartel and club business in general, but I think that he’ll come to realize eventually what the rest of us can see plainly. This is what Jax is built for, whether he likes it or not, he’s a soldier. They had it just right when Tara told Jax they were ‘civilians now’ outside of the Charming city limits, but they had barely even gotten past the city limits before something happened that brought them right back to that familiar hospital setting. It served as a nice parallel to the scenes in that same hospital when Jax and Tara first re-acquainted with each other back in the pilot episode of the series. 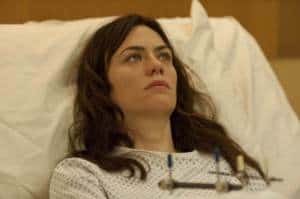 Tara’s emotional breakdown upon the realization that they were fated to stay in that town with both of Jax’s families (Gemma and the club) forever was a bracing epiphany for Jax to have to hear as well. Later on, Opie even tries to reason with Jax about not leaving the club. When we first met Ope back in season one, he was a miserable shell of a man without the club despite the fact that he had a wife and kids. This type of life gets into your blood, for better or worse, and it’s not something that one can just simply walk away from. Even when Jax was briefly ‘his own man’ again he still spoke about riding as being the ultimate thing in life with the cop he encountered out on the road.

Regarding the future of Tara on this show, we’ve seen that once a hit is called that it’s not over til it’s been fully handled. If she’s going to become this constant source of guilt for Jax then I’d honestly rather see the hit go off as planned now that she’s in the hospital. I’m quite aware of how harsh that sounds, but it will come to a certain point of: would you rather see Jax leave the club and be with a bitter miserable wife (don’t say that Tara isn’t already rightly exhibiting that sort of emotional response now that her career may well be over with), or would you rather have him experience the kind of tragedy that good drama is made of, and have this real fire lit under his ass lead him to take this club out of Clay’s increasingly frail hands?

Even the title of this episode, ‘Hands’, refers not only to Tara’s injury but to Clay’s own hands and the damage they can do. After a particularly nasty exchange between himself and Gemma following the money being taken out of the safe, things only got worse for the king and queen of SAMCRO as the two engaged in an explosive and very difficult to watch altercation in the episode’s second half. They have it out about everything: John Teller’s death, Clay ordering the hit on Tara, and Gemma and Clay’s own twisted history of deceitful acts. As if it wasn’t squirm-inducing enough to have Clay give his patented, ‘you’re just an old lady not a member of this club’ speech earlier on, to see the both of them go full-on at each other made for some of the most distinctly uncomfortable but cathartic scenes in an, ‘it needed to happen’ way that this show has ever produced. Gemma clawed, kicked, and spat at the man she’s done so many morally questionable things for–even at one point firing her gun at Clay to keep him back. But as soon as she threatened to expose him for the kind of things he’s capable of doing regarding both the hit on Tara, and by doing so guaranteeing future absolution in her son’s eyes for how J.T. died, Clay goes absolutely ballistic. 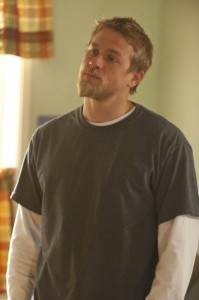 Watching Gemma’s brutal rape back in season two was one very special brand of atrocity, but seeing Clay beat the living crap out of his old lady was an entirely uglier set of circumstances. Thankfully, the camera didn’t feel the need to linger on this sequence. The results of which were dramatically revealed later on in her dimly lit dining room as Unser came by to assure Gemma that the scene of Piney’s death was perfectly staged to keep Clay from being suspected. But Queen Gemma decreed that the King is dead and a Son shall be the one to do it. Really, Jax is the gut reaction as to who it might be, but I could see a few other Sons putting a bullet in Clay’s skull for all that he’s been behind this year.

Unfortunately right now, Jax and the boys are going to get caught up in seeking retribution against the Lobos for the one thing that they didn’t actually have anything to do with. Even besides Piney’s corpse being at the cabin waiting to be discovered, Linc Potter claimed that every Son at the upcoming meet with the Irish will go down. So Gemma’s going to have to work fast if she wants to bring down Clay for good on her own terms. But make no mistake that a regime change is coming and it’s going to be a bloodbath to get there–emotionally and otherwise as the Sons will face their greatest challenge yet. Staying in one piece with everything from the government to each other tearing at the club from all sides.