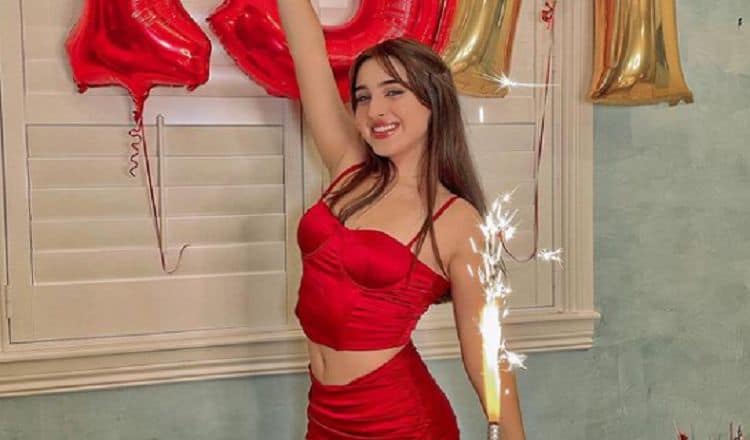 You can always tell a generation by their knowledge of TikTok. The older generation knows very little about the social media app, but those who are a bit younger know everything there is to know about it. They grew up with it. Social media wasn’t always on the radar of young people – believe it or not, it did not exist when some of us were teenagers – but it’s a way of life for the world these days. Growing up today, kids have no idea what it is like to live a life where they cannot show the entire world what they are eating, doing, and listening to in a moment or less. Sophia Talamas is a young woman who shares almost all of her life online, and she’s become famous for it. That’s another thing that the world didn’t know back in the day – people who became famous from their bedrooms for doing nothing more than posting selfies and sharing videos. Sophia Talamas, though, has done this with vengeance.

Talamas is one of the younger people on the social media app who have become famous. She’s not yet a legal adult. She was born on July 24, 2003. She will celebrate her 18th birthday in the summer of 2021.

She was born and raised in Miami, Florida. She currently lives there with her family, though she does spend a lot of time traveling around the state. She has a lot of fun where she grew up, and she creates a lot of her content right at home.

3. She is Popular Online

It’s easy to say she’s popular online when her TikTok account has more than 14 million followers. She’s been able to grow her following because her fans love her content. She went viral because she was posting something called subaquatic videos on her account. We imagine that means she was underwater performing, which is probably not something many people are doing at the moment.

4. She is Very Into Music

She doesn’t just love to listen to it. She studies it. She’s attended some of the best music schools to learn as much about music as she can. She attended the Encore Music Academy. She also attended the Miami Conservatory of Music, and she’s clearly learning a lot from her education in the music world.

5. She is an Animal Lover

Sophia Talamas is a young woman who does love her animals. She has a dog and a cat of her own, and they both make regular appearances in her social media videos and posts. Her dog is Merlin and her cat is Athena. She also has a thing for the supernatural, if you didn’t get that from her dog’s name.

Who doesn’t? Even those of us who are double her age and still need to add a few years love Harry Potter. He was around when we were kids. She visited the Wizarding World of Harry Potter at Orlando’s Universal Studios dressed as a witch. It’s a fun place to visit, and we imagine she had a good time dressed as a witch walking the faux stress of Diagon Alley.

Here is a fun fact about Talamas. She is a model. She’s working with Elite Models, and she is booking jobs and taking her career in as many different directions as she can. She’s currently social media famous, and she’s using that fame to see where else it will take her in life. It’s a wise move from a young woman.

Most of her Instagram photos include only herself, and she’s always showing skin. She’s inherently confident, and that is a good thing. How her parents feel about her posting photos in her bikinis and crop tops for millions of people to see remains to be seen, though. She knows what gets the likes, but we imagine her parents don’t love it.

She’s achieved influencer status on Instagram, too. She has more than 872k followers, which is a lot. Most kids her age have a few hundred – maybe a thousand. She has hundreds of thousands, and we imagine she will celebrate 1 million followers within the year. She can charge a premium for sponsored content and ads if she is working with brands and has the desire.

10. She Keeps Her Personal Life To Herself

She’s only 17, so she really doesn’t have that much of a personal life, but she does keep things like that off the internet. We don’t know what she’s up to in terms of dating or things like that, and it should be that way. She’s still a child, and she should maintain as much of her own privacy as she can from the rest of the world as long as she can.