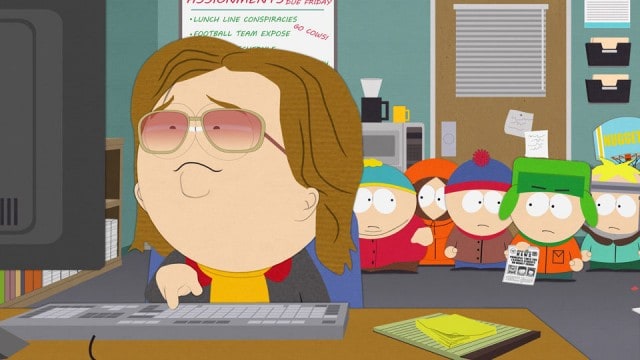 South Park‘s combination of the PC culture coupled with references to just about every dystopian movie has led to an amazing season. This serialized plot has been unique, but I really am loving all of the weekly references and how they kept coming this week. The penultimate episode of Season 19, “Truth And Advertising,” definitely was more of a quiet setup for the finale, but still was lined with amazing jokes and interesting plot developments. The advertisements are behind everything, and there is aÂ Terminator/ Blade RunnerÂ -esque conspiracy happening around the country that everyone is being sucked into; yet, we still don’t know who is actually behind it all, or who is going to be the big hero, which leaves a lot to speculate about heading into the finale.

One thing that I immediately liked about this episode was that we got to see more of the boys this week.Â South Park has been telling a very fun story this season, but in certain episodes, it has felt like Stan, Kyle, Cartman, Kenny, and Butters have been nonexistent, which has been a little disappointing because they are usually the focus of everything. While I love how the show has built up its supporting characters like Randy, Garrison, and even the newcomer, PC Principal, I will admit it’s odd to have them taking over sometimes. It’s not the worst thing in the world, but I definitely enjoyed thatÂ South ParkÂ was able to get back to its main characters and how they are involved with everything.

Their re-incorporation was pretty amusing because you realize they are sort of, half-manipulated by what’s going on. The four of them try to get to the bottom of things together, but keep being distracted by advertisements. The quick clips of them acting serious only to be distracted by all of the pop-ups and then end up doing something completely different was pretty funny. The whole progression of their distraction is amazing; the pop-ups become more and more enticing or distracting by starting with something small, evolving to a movie they might see (VictorÂ Frankenstein),Â which they argue about whether it will be good or not, then the knockout punch happens by showing them a deal at a local store or restaurant, which makes them completely forget about searching for the truth.

Even Jimmy is beginning to lose his power to be uninfluenced by the advertisements, and Leslie is able to sway him in the mostÂ Ex Machina way possible. I really loved the plot with Jimmy because it’s the main focus of the sci-fi movie references each week. Last week, there was the bigÂ Terminator/Blade Runner theme, and this week gave us a more recent play onÂ the 2015 movie,Â Ex Machina. The more Jimmy talks to Leslie, the more she appears to him as a normal girl who is just being held here against her will. The scene where she cuts the power and the red lights come on was a phenomenal use of one ofÂ Ex Machina’s best scenes. It’s enough to convince Jimmy that the news men might just be the other extreme side of the coin. He helps her escape, which makes it clear things won’t end well, and he pays the price for it in anotherÂ Ex Machina type scene, where she beats him pretty bad by tossing him all around the room.

It’s disappointing to see Jimmy, one of the few pure characters left, be converted and taken out. So what hope doesÂ South Park have left? Randy. The spy trio of Garrison, Principal Victoria, and Caitlyn Jenner hunt down Randy and reveal that he is actually a PC bro; however, Randy makes it clear he’s done with this fad and can’t afford it anymore. Randy is such a great character because he’s a complete materialist, which works to the advantage of the people in this episode. Although Randy has been influenced by the advertisements through the PC fraternity, he’s pretty much over it at this point. They reveal his butt tattoo but decide to bring him along to show him what’s really going on. I could easily see Randy becoming the hero in the finale next week, as the Marcus Wright character fromÂ Terminator Salvation.Â Â Despite your feelings on that movie itself (bleh), Randy could be the hybrid who discovers what he truly is and feels the need to redeem himself for everything he has caused. He was the one to bring the Whole Foods to town and join the PC brigade because it was cool andÂ didn’t consider how it could destroyÂ South Park.

I think that this season ofÂ South Park has been a lot of fun so far. It’s definitely different with its serialized plot and use of supporting characters in bigger roles, but I don’t mind the show trying something that’s a little more experimental. The story has still taken a look and stance on one of the biggest movements in culture right now and crafted a great dystopian sci-fi tale aboutÂ it. I wish we knew a little more about who the main antagonist is, but I also love the mystery of it all. The finale is shaping up to be a hilarious and great battle between the advertisements and their PC minions andÂ the small remaining survivors ofÂ South Park. I’m hoping to see the finale start with the spy team stumbling on the hunger-striking PC bros., who burst out of the house chasing them like an army of Terminators or the zombie monsters fromÂ I Am Legend. Regardless, I think it’s going to be a crazy finale, and I am excited to see howÂ South Park wraps up what it the excellent arc that it has established this season.