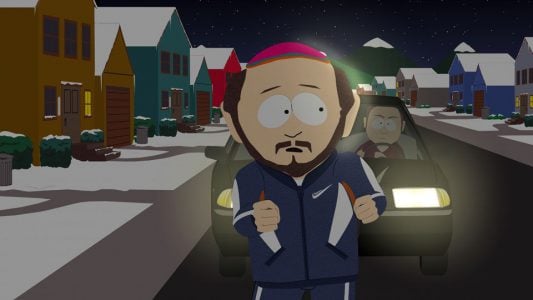 Last season,Â South Park displayed that it could successfully accomplish a full season plot that built up a serialized story within each episode. In the past year or two, American culture has shifted in a new direction of acceptance and Parker and Stone are playing around with a lot of those ideas. The previous season touched on the build up to the election and politically correct culture in America, and season 20 seems to be following suit, but focusing more on internet culture.Â South Park isn’t afraid to include the most ridiculous aspects of culture either, which is why last night’s episode explored the recent “dick’s out for Harambe” movement.

As the battle between boys and girls rages on at South Park Elementary, the boys are finally pushing back. With no Eric Cartman to lead them with some absurdly ruthless plan, it turns out to beÂ Butters who steps up to start a men’s rights movement.Â The wiener’s out movement really moves this plot into being the perfect storm because it raises the absurdity to a new level. The scene where PC Principal has to explain how he can’t stop them from protesting because it would be unfair as well as body shaming is incredible and plays up the idea that all of the world’s protesting is not a bad thing, but could just as easily get out of hand and become a power struggle.

Yet, the boys of South Park Elementary are truly just defending themselves here. While the girl’s position also makes complete sense, it wasn’t actually any of the students doing the trolling to begin with, and now they are being wrongfully punished by the girls. It’s a really fun back and forth that the show has to work with, but it’s also interesting because the wiener’s out protest seems to be another thing that really pushes the trolling scenario to new extremes as well.

The more intriguing plot this season focuses on Gerald and his secret nighttime trolling sessions. While Gerald originally thought he was merely, “riling people up,” he is now learning the full ramifications of Skankhunt42’s actions. Gerald has caused someone to commit suicide, pushed a company into creating anti-trolling software, and has caused an uprising in South Park as well. Â Oh, not to mention his wife now thinks he has a fetish for golden showers because he was so worried about preserving his secret identity. “Wiener’s Out” is the first episode where he starts to feel some kind of remorse because of how out of hand everything has really gotten. The season has really crafted an interesting plot around Gerald and Stone and Parker are really handling the serialized story even better this year because there is a lot more suspense and the actual story has a larger scaled seriousness to it compared to the prior story.

It’s nice thatÂ South Park is able to create all of these complex layers that have a major influence on other parts of the story without actually coming into contact with them. For instance, Gerald causes the entire conflict at the school with the kids, but he has no idea that’s really going on, which is a part of what makes this show so smart. With the new development of the troll hunting software, the show is about to get even more interesting. Not only does this software find the trolls, but it seems likeÂ South Park is going to tackle the idea of internet spying again in some way, or even doxxing people.

South Park has established that it can successfully accomplish anything without losing it’s integrity or core. While this season has been another unique one with a season long plot, it keeps things extremely interesting in new ways. Between Cartman’s newfound PC attitude, the two budding wars and the mystery of everything, it’s an exciting season for the show. Considering this is a landmark season for South Park,Â things are probably going to spiral extremely out of of control at some point. There is no way they let Cartman stay nice and happy in the long-term which means something really messed up is going to have to happen in order to revert him back to being evil. Where has Kenny been in all of this? While the character isn’t necessarily needed, there are some great openings for a Mysterion sub-plot to play into things as well. Regardless, the show has a ton to work with right now andÂ South Park never let’s down when it comes to delivering satisfying conclusions.