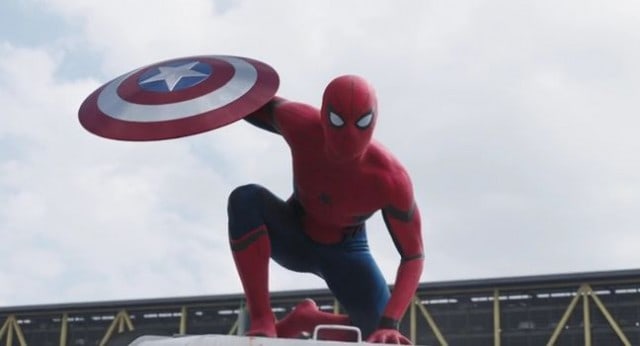 The wait is over fans.Â  Everyone’s been anticipating it and in the very last few seconds of the trailer we get what we’ve been waiting for.Â  With the upcoming film Captain America: Civil War fans have been speculating that an appearance by Spider-Man might happen.Â  As you can see in the photo above, Spidey’s got a piece of Captain America’s property as the heroes from Marvel go to civil war with each other.

It appears that he’s on the side of Iron Man but we’re not 100% sure just what side, if any, he’s on.Â Â  Spider-Man is in fact a Marvel character but he was licensed to Sony Pictures long ago. Iron Man, the The Avengers, Guardians of the Galaxy… those films under the Marvel Studios banner existed in a separate cinematic universe, but Sony made a bargain to share a new version of the character in a deal that seems to benefit all sides.

Well, all sides except for Captain America so it seems.Â Â  For fans waiting for the next stand alone Spider-Man film, that’s set for next year with Tom Holland playing Peter Parker.Â  For now, enjoy this awesome trailer for Captain America: Civil War.Â  Looks like all hell is breaking loose in Marvel land!