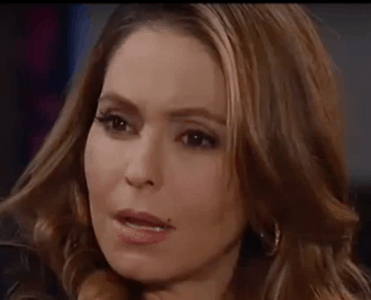 Things in Port Charles seem to be up, and everyone seems to be either running to something or running from it. Well, it looks like things won’t be slowing down any time soon, andÂ Carlos may not be able to make the smooth escape heÂ originally planned. With Jordan and Anna hot on his heels, they will be making their way to Sabrina’s apartment ready to do whatever it takes to get some answers. After all, it’s becoming more and more evident, at least to Anna, that Sabrina may be the key to digging up more dirt on Carlos. Although she doesn’t currently have any proof, Anna is putting the pieces together and it’s only a matter of time before she realizes that Sabrina is actually helping Carlos. For someone who is carrying a child, Sabrina just doesn’t seem to know when enough is enough.

You would think she would want her pregnancy to be as stress free as possible, but things are probably only going to get worse from here. Who knows what will happen when Anna and Jordan actually get to the bottom of this, but chances are it’s not going to end well for Sabrina or Carlos. If there’s a lesson to be learned here, it’s that if your lucky to get out of a bad situation, it’s probably a good idea that you stay out. If things keep going the way they seem, this is something that Carlos is going to learn the hard way.

From a real life standpoint, Teresa Castillo, who portrays Sabrina, is expecting her child soon, so there will probably be some sort of twist that causes Sabrina to be out of the picture for a few episodes.

For Anna,Â Carlos isn’t the only person that sheÂ has her eyes on and she’s now added Paul and Julian to her list of people to expose. She realizes that Carlos couldn’t have faked his death alone, and she’s ready to pinpoint anyone else who was involved. Although it’s unclear how soon she will be able to connect all the dots, it’s definitely coming and Anna isn’t going to give up until she finds exactly what she is looking for. After all, payback is no joke, especially when it’s as personal as it is for Anna. However, while some people may think that shooting whoever killed Duke would be the ultimately revenge, Anna is likely to put them behind bars instead. Nothing is worse than having to live with your mistakes, and in prison there won’t be much else to do except for think about all of their wrongdoings.

Meanwhile, spoilers reveal that Paul and the rest of the mafia crew will be facing some issues as well. It’s getting a little difficult to tell who is actually in charge, but it’s clear that Paul’s position isn’t as powerful as he hoped.

On top of that, Julian and Alexis are getting ready for the biggest day of their lives, but with the way things are going, there’s probably going to be some wedding related drama very soon that could derail the couple’s future plans. Judging by the track record of almost everyone in Port Charles, it’s nearly impossible for an event go to off without a hitch, especially when it’s supposed to bring everyone together.

With so many things up in the air, from Sabrina and Carlos to Julian and Alexis, there will definitely be some very big moments in the near future. However, with so many competing interests, it goes without saying that it’s impossible for things to end well for everybody.

Tune into General HospitalÂ on ABC at 2PM EST.