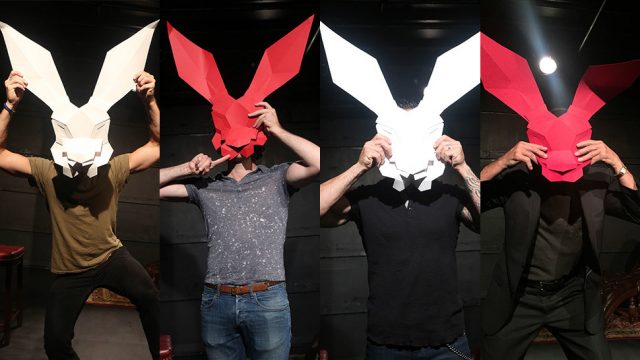 The ABC show Castle was cancelled last season. Â However, for a lucky few Stana Katic fans, they’ll be watching the actress perform live in the acclaimed off-Broadway play White Rabbit Red Rabbit. Â Â The tickets for this sold out the day were announced! Â Although, there may be a few rush tickets today, Â it will definitely be a full-house tonight!

What exactly is White Rabbit Red Rabbit? Â Well, I haven’t seen it yet – and neither has Stana Katic. Â One of the show’s premises is that the actor doesn’t get to see the script until just before walking on stage! Â The other is that an actor only gets to do it once! So every performance of this show – including tonight’s – is a once-in-a-lifetime event!

Without knowing anything about the show a literary-minded person might jump to thoughts of the famed Lewis Carroll booksÂ Alice in WonderlandÂ and Through The Looking Glass. Â While there is some of that absurdist ideal in this play, that’s not where the rabbits in the title come from. Â  I won’t say more than that. Â You can look for those spoilers online if you want.

Katic was just seen in the Lifetime Movie event Sister Cities. Â SheÂ has another film, The RendezvousÂ premiering at theÂ Mill Valley Film Festival on October 8th. Â Still, the formerÂ Castle star never forgets her fans. Â For those who may not have been able to get tickets for the show she’s created a scavenger hunt in the city!

The clues are all clues from the show Castle, giving those fans a real treat!