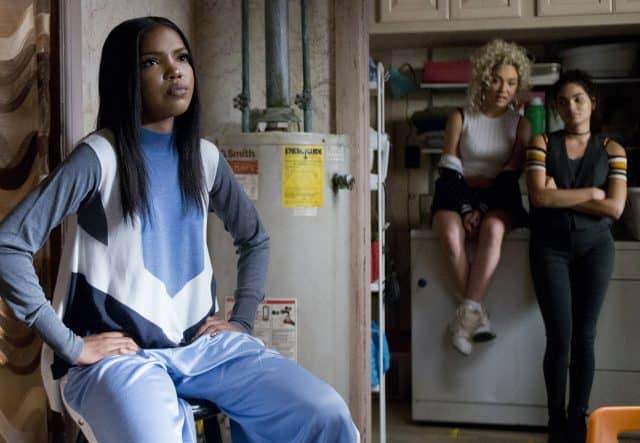 If you’re craving an Empire fix before the show returns in March, sticking around their timeslot for the next few months is still a good idea. In place of Empire you will find Star, the story of three girls running headlong towards a music career. There are those who crave the spotlight with them, and there are those who want for them anything but that life. The real problem is that in chasing their dreams, the girls are also running away from their pasts. Before the girls start this journey, they need to come to terms with the truths they’ve been running from.

To recap our introduction in the pilot: After Star killed her sister Simone’s sexually abusive foster father, they ran away to Atlanta with Alexandra, the daughter of a famous musician who wants to make her own mark in music. Together they found Star and Simone’s godmother Carlotta, who gave them a roof to sleep under in exchange for working in her salon. With the help of Carlotta’s transgender daughter Cotton, the girls caught the attention of Manager Jahil Rivera, who booked them for his godson’s house party to rave reviews. Apart from all the problems each of the girls is running away from, they have no idea that Jahil has a history with Star and Simone’s mother. Thus Carlotta is not going to be happy that Jahil didn’t hear her threat to keep away from the girls.

Not only did Jahil ignore Carlotta, he’s pushing full steam ahead with plans to introduce the girls to the world; despite the fact he has no funds to do so. When going to his godson for help doesn’t work, Jahil has to beg an older, far more dangerous source. The Elizabeth Taylor wannabe he kisses sure seems like a nasty piece of work to do business with, especially when she leaves thousands of dollars worth of cocaine attached to the money she lends Jahil.

Alexandra plans on building a whole new life for herself separate from her parent’s legacy. She has connected with Carlotta’s next door neighbor Derek, she’s doing well in the salon, and most importantly, her music is her own. None of this changes the lies she’s told everyone. When her parents (played by Lenny Kravitz and Naomi Campbell) track her down at the salon, Alexandra has to decide if she’s going to go home or continue with the girls. Everyone is disgusted that Alexandra lied, especially Derek. You’d think that would be incentive for her to go home, but home is not a great option either. Her parents live separately as her dad Roland focuses on his own bad music and her mother focuses on her own drinking. To top it all, Roland thinks it’s appropriate to have Star in his bathtub!

After this disgusting display, Alexandra’s had just about enough. Star may not have slept with Roland, but there are lines you don’t cross. How do you connect two girls who can’t see each other’s perspectives? Enter Miss Carlotta, with a little counsel from her hunky pastor (hello Tyrese Gibson!). She doesn’t lecture, and she doesn’t judge. She’s probably the first true adult Alexandra’s ever been around, which is why the girl feels safe enough to be brave. Alexandra can march up to her parents and throw their credit cards in their faces if she has Carlotta and Derek by her side. Carlotta still has some work to do where Star and Simone are concerned. The girls still have no idea about the history between their mother, Carlotta, and Jahil. They’re owed that much so they have the full picture going forward. Otherwise they’re left with the assumption of what their future should be based only on the mistakes their parents made.

Star and Alexandra work things out, but what of Simone? When she’s not being ignored, Star tells her to shut down about the murder. Since Simone can’t say anything, she sings out her pain in church, right before she collapses from an overdose. It’s not as if Simone’s pain and fear isn’t valid. That’s on top of her not yet knowing her foster dad survived Star’s stabbing. People just need to pay attention so that Simone doesn’t die the way her mother did.

Will Simone be able to handle the future her sister wants for her if she survives?